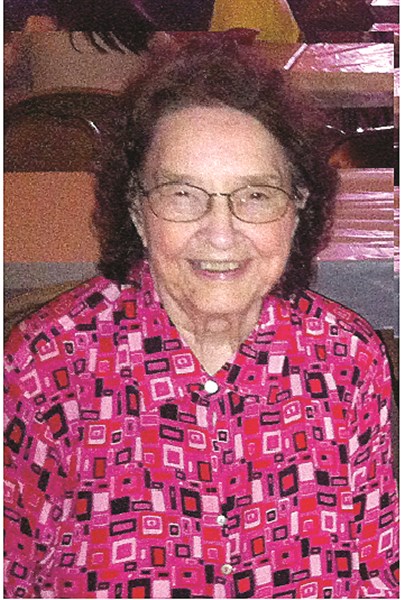 The morning of April 11, 2016, Jeanne Deere Dahl,  Kennedy, Minn. was welcomed home by her Lord and Savior and those that had gone before her whom she dearly loved including her husband of 56 years, Robert N. Dahl, and her parents, Louis and Dorothy Deere.
Jeanne was born at home in Linden, Mo., on March 29, 1928 to Louis and Dorothy Bowman Deere.  At the age of two, Jeanne, her mother and father and older sister Vyrlee Ann moved to Hallock, Minn. where Jeanne’s father began farming.
In 1936, Jeanne’s parents purchased a farm one mile south of Kennedy and here they lived the rest of their lives.
Jeanne was active in high school activities playing the trumpet in the school band and as a cheerleader for the boy’s sports teams. Jeanne graduated from Kennedy High School in 1946 and went on to Moorhead State Teacher’s College where she graduated with her teaching certificate.  She returned to Kennedy and taught a combination class of Third and Fourth graders which included her brother, Louie.
The same year she began teaching, she and Robert N. Dahl were married, September 21, 1947 at the Swedish Lutheran Church in Kennedy. To this union was born two children, Janna Kay and James Marshall. The family made their home on the Dahl farm in Skane Township just west of Kennedy.  Jeanne was a busy farm wife cooking, baking and packing lunch kits for her husband and the many hired men. Jeanne also cared for a large garden and developed a reputation as a great baker.
Throughout her life Jeanne was active at Maria Lutheran Church in Kennedy serving as a Sunday school teacher, the Sunday School Superintendent, and the president of the Ladies Aid.
Nothing was more important to Jeanne than her faith in Jesus Christ and her family. She was a loving and giving wife, mother and grandmother and will be deeply missed by her children, grandchildren and great-grandchildren.
Jeanne is survived by her daughter, Janna K. Davis, Grand Forks, N.D.; her son James M. Dahl and his wife Janel Dahl, Kennedy; her five grandchildren Lindsay (Kevin) Kuntz, Grand Forks, N.D., Nancy (Jordan) Wojnarski, Leander, Tex.; Lauren (Scott) Foyt, Andover, Minn., Shannon Dahl, Minneapolis, Minn., and Brett (Tasha) Dahl, Kennedy; her great-grandchildren Rylan and Reagan Kuntz, Kendall Wojnarski, Quinn and Lyden Foyt, and Henry Dahl; her two sisters, Beverly Lundberg, Kennedy, and Cheryl (Robert) Mattson, Warren, Minn.; her many nieces and nephews; and a multitude of relatives and friends.
She was preceded in death by her husband; her parents; a sister, Vyrlee Deere; an infant brother; brother, Louis Deere and his wife Mary Louise; brother-in-law, David Lundberg; and a son-in-law, Allan Davis.
Funeral services were held Saturday, April 16, 2016 at 2 p.m. in Maria Lutheran Church, Kennedy.  Interment was in the Kennedy Cemetery. Visitation will be held on Friday evening at Austin Funeral Chapel in Hallock from  6 to 8 p.m. with a prayer service at 7 p.m.   Pastor Kathy Levenhagen, presiding; Charles and Patti Swanson, duet; Macyn Lofstrom, soloist. Casket bearers will be Rich Deere, Kelly Mattson, Mark Lundberg, Brett Dahl, Scott Foyt, Kevin Kuntz, Jordan Wojnarski, Rylan Kuntz and Thomas Deere.
Austin Funeral Chapel, Hallock was in charge of the arrangements.