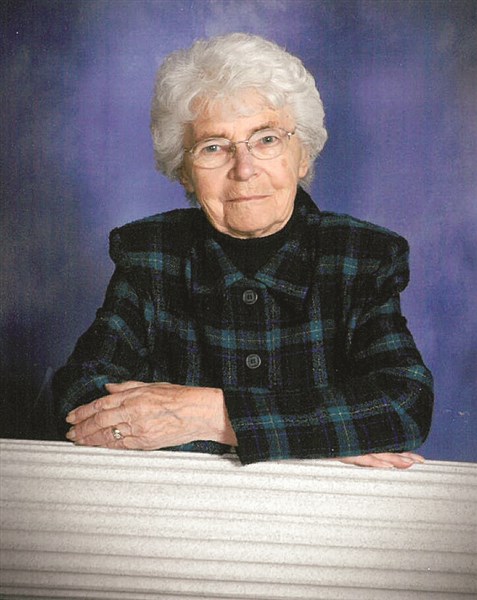 Evelyn Eunice Berg passed away December 24, 2015. Evelyn was born May 22, 1926.
Beloved wife of 62 years to Kenneth D. Berg, Evelyn passed peacefully while surrounded by family at Cherrywood Advanced Living, Richmond, Minn.
Growing up in Lancaster, Minn., and the eldest of three daughters born to August and Edith (Nelson) Lindquist, she was baptized and confirmed at the Sion Lutheran Church, and also attended school in Lancaster through graduation.
After a Valentine’s Day wedding in 1948, the couple made their home on the Berg family farm in rural Lake Bronson, Minn., where they raised Hereford cattle, chickens and small grains.
After moving to Thief River Falls in the early 1960s, they formed business partnerships and began developing residential, commercial and farm land.  Evelyn was the part of these ventures that knew what was needed, where it was, got it done and meticulously recorded everything – without a computer! Evelyn took pride in her yard, which meant mowing by hand because she didn’t like the tracks made with the rider.
Together, they enjoyed extensive travels to Europe, the Scandinavian countries, New Zealand, the Fiji Islands, Australia and throughout Canada and the U.S., including Hawaii and Alaska. They especially enjoyed time spent at their Lake of the Woods cabin.  In later years, you would often hear her say “been there/done that” – her quick wit and unexpected quips were so much a part of her personality.
Evelyn was a loyal volunteer with the 7th District DFL Party, working in various capacities. The highlight of this was her time as treasurer for Bob Bergland when he served in Congress.
Evelyn is survived by her sisters Marian Horan, Sun City West, Ariz. and Lois (Harvey) Cederholm, Waite Park, Minn., and Kenneth’s foster brother Jack (Sharon) Israelson,  Bemidji, Minn., plus several nieces and nephews.   She was preceded in death by her parents and husband, Kenneth in 2010.
The family extends a special thank you to Minnesota Greenleaf, Thief River Falls, Cherrywood Advanced Living, Richmond, and St. Croix Hospice of Sartell, Minn., for the warm and gentle care given to Evelyn.
In lieu of flowers, memorials are preferred to COLEG at Lancaster.
A celebration of her life will be held at 10 a.m. on Monday, May 16, 2016 at Redeemer Lutheran Church, Thief River Falls,  with a gathering of friends and family one hour prior to the service. Burial will follow at Riverview Memorial Gardens, Lancaster, at 1  p.m.
Condolences may be sent at www.johnsonfuneralservice.com