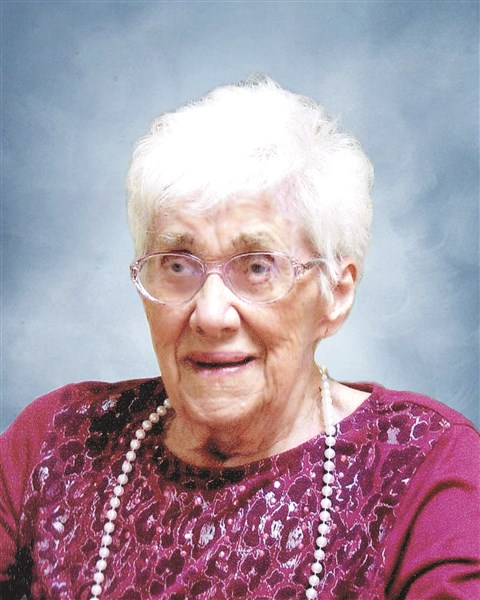 Grace Rosten, 95,  Warren, Minn., passed away on Thursday, May 12, 2016, in the Good Samaritan Center, Warren.
Grace Linnea was born May 6, 1921, in Lancaster, Minn., to Alex and Elvira (Borgeson) Norland. She was raised in Lancaster and graduated from high school. She went on to study Practical Nursing in Minneapolis and completed her internship at the hospital in Crookston, Minn.
On June 8, 1946, Grace was united in marriage to Harold Rosten in Maple Lake, Minn., and lived with his parents for a short time while he served in the US Army. After Harold returned, the young couple made their home on a farm in Fertile, Minn., and later in Warren, where they raised their six children.
Grace kept busy over the years, working at several nursing homes in the area, including the one in Hallock, for which she lived in Stephen, Minn., for a time. She was a longtime member of the American Legion Auxiliary, was very active in her church, and volunteered extensively in the community. In addition to enjoying word search puzzles, Grace had lovely handwriting and enjoyed writing letters and sending cards to her friends and family.
Grace is survived by her children, Lenora (Archie) Nelson, Granville, N.D.; Beverly (Ralph) Knoll, Brenda (Roland) Pokrzywinski, both of Warren; and Gregory (Jessica), Little Canada, Minn.; 11 grandchildren; 17 great-grandchildren; four great-great-grandchildren; sister, Marlys (Earl) Clow. Onalaska, Wisc.; and sister-in-law Elsie Norland.
She was preceded in death by her parents; husband, Harold; children, Robert Rosten and Karen Brault; and brother, Milton Norland.
Memorial services will be held Monday, May 23, 2016, at 2 p.m., in Our Savior’s Lutheran Church, Warren; with visitation one hour prior. Rev. Janet Warnes officiating. Bev Karr will be the organist with music by Linnea Lemer and David Kolschefski.Honorary bearers will be Grace’s grandchildren.
Interment will be at Maple Lake (Minn.) Lutheran Cemetery.
Arrangements with DuBore Funeral Home,  Warren, with an online guestbook at www.DuBore FuneralHome.com.