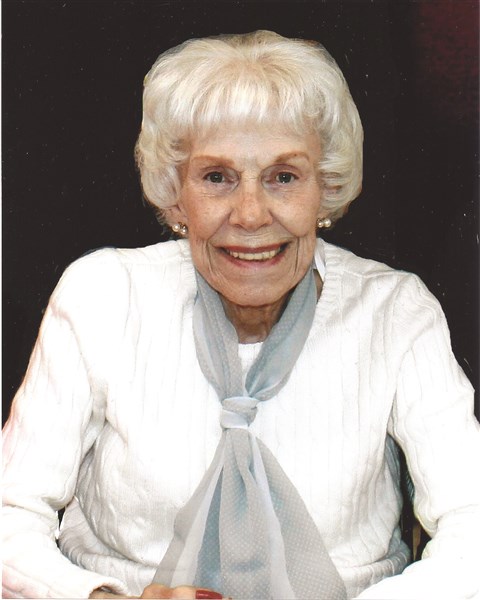 Lucille E. Gustafson, 91 Hallock, Minn. passed away at Kittson Memorial Healthcare Center, Hallock, Monday, April 25, 2016.
Elizabeth Lucille Thielen was born February 22, 1925 at Langdon, N.D.  The daughter of Mae Hagan and Nicholas Thielen, she attended St. Alphonsus Catholic  School, Langdon, through the 8th Grade, then attended one year at Langdon Public School and later moved to Bellingham, Wash., in October 1940.
Upon her graduation in 1943, the family moved to Auburn, Wash,. where she was employed at Boeing in Renton for six months, the Army Depot for two years and Pacific Telephone Company for four years.
On February 26, 1952 she was united in marriage to Lionel Gustafson.  They returned to the Hallock area and were engaged in farming with Lionel’s brothers until Lionel’s retirement in 1982, when they then moved to Hallock.  In the off season they loved to travel, some favorite places included, Palm Springs, Ariz. and Florida.
Lionel passed away on April 7, 1993 and Lue continued living in her home in Hallock. In 2014 she moved into the Assisted Living and later to Kittson Memorial Nursing Home.
Lue loved to crochet lap robes for the resident’s in her spare time. At the time of her death she was working on her 23rd. In her younger years she loved entertaining for bridge club, birthday club and homemakers club. She enjoyed making buns, homemade jelly and baking and if you stopped by to chat she always had a cup of coffee and a homemade treat.  She enjoyed all her friends and “Family” and her famous saying “O Kid” always ended up in the conversation.
Lucille is survived by Rod (Teri) Gustafson, Gilbert, Ariz. and Rick (Sheila) Gustafson, Hallock; brother-in-law, Allan Ray of Hallock and several nieces and nephews, two grandchildren, Alex and Allie,  Hallock and three step-grandchildren, Brian (Heather) Wilkin and family, Phoenix, Ariz., Kasey (Shaun) Peterson and family, Alexandria, Minn. and Kari (Jon) Turcotte and family, Nashua, N.H.
Preceding her in death were her husband Lionel, her parents, sisters, sister-in-law’s and brother-in-law’s.
Funeral services were held Sunday, May 1, 2016 at 11 a.m. in St. Patrick’s Catholic Church, Hallock.  Interment was in Greenwood Cemetery, Hallock. Fr. Craig Vasek, presiding; Sharlene Klegstad, organist; Karen Vold and Jillayne Kraska, duet. Honorary casket bearers will be Lue’s nephews Derek, Bob, Bruce, Tom, Bill and Tim Gustafson and all those in attendance.  Visitation was held at Austin Funeral Chapel, Hallock, Saturday evening from 6 to 8 p.m. with a prayer service at 7 p.m.
Austin Funeral Home, Hallock, was in charge of the arrangements.