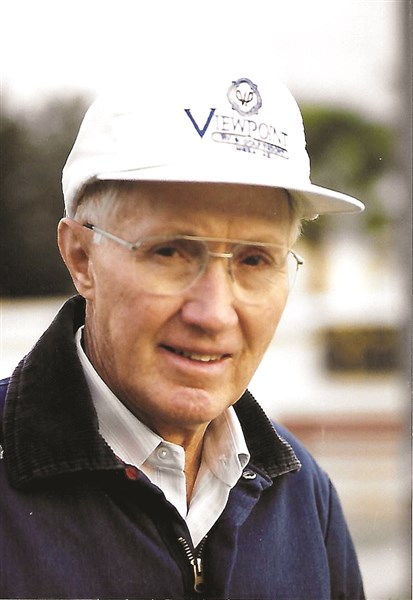 Dr. Allen Larson, 93,  Greenbush, Minn., died Saturday, June 4, 2016 at Karlstad Senior Living in Karlstad, Minn.
Dr. Allen F. Larson, was born March 6, 1922 at Backus, Minn. to Harry and Marova (Hanks) Larson.  He attended country school and graduated from Backus High School in 1941. He enlisted in the US Navy in 1942 and served until 1946 as a motor machinist on a mine sweeper.  He married Carol Jeanne Krinke on Christmas Day in 1950.  They had two children, Paul and Patricia.
Allen attended the University of Minnesota, Veterinary College 1948-1954.  After graduation he established a practice in Greenbush.  He practiced 32 years, retiring in 1986. He was a member of the Greenbush Community Hospital Board 1955-1973. He was chairman of the board when the Nursing Home was built.  He served as Mayor of Greenbush 1958-1960.  The land for Oak View Golf Course was purchased during his tenure. He was a member of the American Veterinary Medical Assn., The Minnesota Veterinary Medical Assoc. and Bethel Lutheran Church.
Dr. Larson wanted to become a veterinarian when, as a child, he saw a veterinarian deliver his state fair colt. He was devoted to his practice, spending almost all of his time working for 32 years.  His retirement was busy also, spending time with his children, grandchildren and great-grandchildren, planting trees, gardening and caring for his lawn.  He enjoyed fishing and water-skiing with Paul and the grandchildren.  He water skied into his 80’s.  He and Carol spent 29 winters in Arizona, enjoying square dancing, shuffleboard and their friends.  They also enjoyed traveling, both in the US and abroad.
He is survived by his wife, Carol Larson, Greenbush; daughter, Patty (Peter) Fahnlander,  Lakeville, Minn.; grandchildren: Matthew Larson,  Detroit Lakes,  Minn., Mikkel Langaas, West Yellowstone, Mont.,  Mark (Amy) Larson, Hawley, Minn.,  Cara (Rick) Sorenson, Chaska, Minn. and Patrick Fahnlander, Lakeville, Minn.; five great-grandchildren:?Ethan, Paul, Preston, Josie and Ayden; sister, Evelyn (John) Pos,  Richardson, TX; brothers and sisters-in-law, Pauline DeJong, Monroe, Wash., Lambert (Jean) Krinke,  St. Paul, Minn., Mariann (Harold) Ostbye, Monroe; nieces, nephews and other relatives and friends.
He was preceded in death by their son, Paul Allen Larson in 1999 and a sister Adeline Larson.
Funeral Services were held Thursday, June 9 at 11 a.m. in Bethel Lutheran Church, Greenbush.
Burial was in Bethel Lutheran Cemetery with Military Honors provided by Moen-Zimek Post 88, American Legion of Greenbush.
Arrangements were with Gieseke Funeral Chapel of Greenbush.