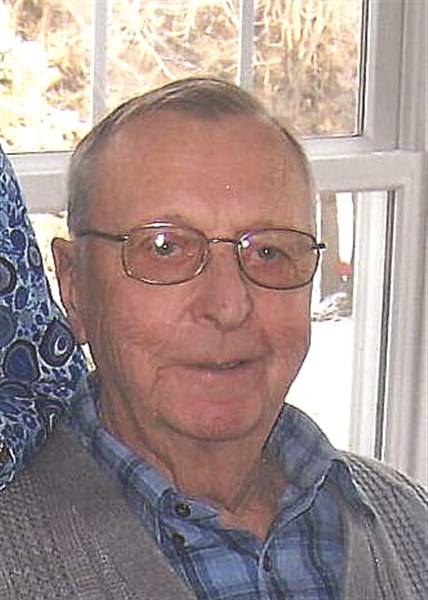 Charles Lindberg, 87, Kennedy, Minn.,  passed away at Kittson Memorial Healthcare Center, Hallock, Minn., on Saturday evening, July 16, 2016.
Charles Harold Kenneth Lindberg was born to the late Nels and Emily (Bloomquist) Lindberg on June 8, 1929 in Hallock. He was baptized into the Lutheran faith at Red River Lutheran Church. Charlie married Betty Rudisill on September 25, 1951. These two love birds eloped, against the wishes of her parents, who said it would never last. How wrong they were! On the 25th of September this year, they would have been married 65 years.
Charles attended country school in Svea Township through the 8th grade at which time he spent his freshman year at Crookston. The last years he attended school back in Kennedy. Throughout the years, Charlie wore “many hats”. He farmed and did construction work at American Crystal in the early years as well as “up on the Iron Range”. During the 70’s he ran and then purchased the Tech Aides store in Kennedy which he sold in 1978. Charlie was elected Kittson County Commissioner for District 2 in 1985. This was something he really enjoyed until he retired in 2001.
Charlie and Betty lived in many homes throughout the years until 1979 when they built their new home in Kennedy. They hosted and entertained many holidays together there and really made these events special for the family.
Throughout their 64+ years together, Betty and Charlie enjoyed many things, fishing, square dancing and volunteering topped the list. The Kennedy Senior Center, Kittson County Museum and Kittson Memorial Nursing Home were three of their favorite spots to be. Charlie’s health deteriorated very rapidly after Easter of this year and in June he was diagnosed with lung cancer. Together they made the decision to leave their home and get settled into the Kittson Memorial Nursing Home, where they remained until his death.
Charles was preceded in death by his parents, Nel and Emily; his son, Barry in 2009; a sister, Verle Skaren; as well as Betty’s parents, Alvin and Marian Rudisill and two brothers-in-law, Roy Carlson and Clarence Skaren.
He is survived by his beloved wife, Betty; daughter, Patti (Tom) Gustafson, Hallock; four grandchildren, Matt and Steve Gustafson, Fargo, N.D.; Krista (Louis) Medina, South St. Paul, Minn., and Molly (Brett) Sobolik, Hallock; great grandchildren, Siri and Hannah Medina and Nora and Blake Sobolik. Other family members include Carol and Andrae Carlson and Alvin “Bud” (Jan) Rudisill and family.
A celebration of life for Charles will be held  Wednesday, July 20, 2016 at 10:30 a.m. in Maria Lutheran Church, Kennedy. Interment will be in the Kennedy City Cemetery. Visitation will be held at the church for one hour prior to the service. Pastor Kathy Levenhagen, presiding; Don and Kris Thorlacius, duet. Honorary casket bearers, Matt Gustafson, Steve Gustafson, Krista and Louis Medina and Molly and Brett Sobolik.
Austin Funeral Chapel, Hallock, is in charge of the arrangments.