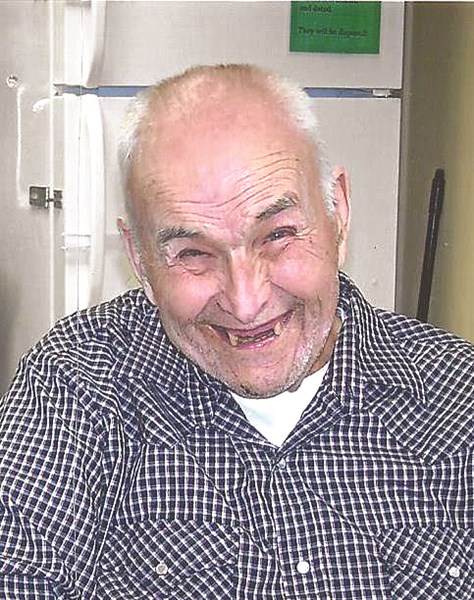 George Keith Hickok, 90, Lake Bronson, Minn., passed away at Karlstad Healthcare Center, Karlstad, Minn., on Saturday, July 16, 2016.
George was born October 6, 1924 the son of Charles and Mary (Kelly) Hickok at Bradley, N.D. George spent most of his life west of Lake Bronson.  George would do odd jobs for some people around Lake Bronson.  He and his brother, Wayne, would love to watch people plant their crops and watch the deer out in the fields.  George was the official greeter at the nursing home. His big smile and high-five greeted people when they came in. Everyone knew George and enjoyed him.  The nursing home girls said he was a dream to take care of. He absolutely loved living there.  They knew his love for the John Deere tractor and would tease (in a good way) about the John Deere.  You would see him and he had his John Deere cap on most of the time. His favorite saying was “Hello Buddy” to people and then the high-five or handshake would come and as always a “Big” smile. He was always happy.
He is survived by his sister, Shirley Gunnarson, Lake Bronson; as well as numerous nieces, nephews and their families.
George was preceded in death by his parents, Charles and Mary; sisters, Mary (Edwin) Blomquist and Alice Hickok; and brothers, Wayne, Lester, Myron, Theodore (Esther) and Charles (Marion) Hickok.
Funeral services were held Tuesday, July 19, 2016 at 7 p.m. at Austin Funeral Chapel, Hallock, Minn. Interment will be in Riverside Cemetery, Lake Bronson. Visitation was held at the funeral home for one hour prior to the funeral service. Pastor Kathy Levenhagen, presiding; Marjorie Hawk, soloist.  Casket bearers will be family and friends.