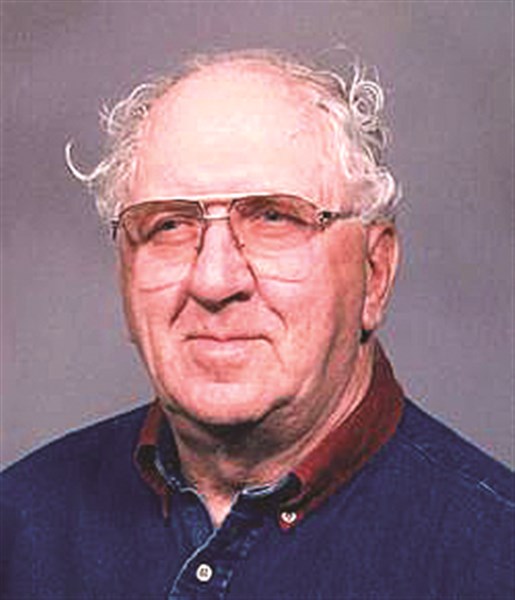 Lyle Kemnitz, 89, Pembina, N.D., passed away Monday, August 1, 2016, at the Lutheran Sunset Home, Grafton, N.D.. Funeral services were held Friday, August 5, 2016 at 2 p.m. at the Pembina Lutheran Church, Pembina, N.D. Visitation was held Thursday, August 4th from 5 p.m. to 7 p.m. with a 7 p.m. prayer service at the church. Burial was at the Cavalier Cemetery.
Lyle Kemnitz was born May 23, 1927 at Cavalier, N.D. to Leonard and Anna (Grube) Kemnitz. Growing up he attended country schools in Carlisle and Pembina townships. In 1942, he and his family moved from Hamilton, N.D. to rural Pembina, where they farmed.
On May 29, 1945, Lyle enlisted in the Navy at the age of 17. While in the service he was stationed in Samar, Philippines with the rank of Seaman 1st class. After his discharge, Lyle attended the Agricultural College in Crookston, Minn. It was there he met his wife to be Gladys. On October 22, 1948, Lyle married Gladys Torgerson at Crookston. They farmed and raised their four children in the Pembina area.
Lyle was a life member of the Kern-Thompson Legion Post #77 for 59 years and a life member of the VFW, Kennedy, Minn. He was also a member of the Hallock Eagles, Walsh County Gun Club, and the Valley Cruisers.
One of his greatest passions was deer hunting. He spent countless hours feeding and watching the deer. A keen eye from quite a distance. He was a huge NASCAR fan with Dale Sr. and Dale Jr. being his favorite drivers. Lyle was known to be quite a “Hustler” as he took on many with his excellent skills at playing pool. As many know his one-handed technique would beat many.
Lyle also enjoyed going to auctions with family and friends and knew a “good deal” when he saw it. His love for fishing in Canada, Lake of the Woods, and the Red River was also a passion. Above all, Lyle worked hard all of his life and instilled the value of hard work in his children and grandchildren.
The biggest love of all was his wife of 67 years, his children, grandchildren, great-grandchildren, and many relatives and friends. He had a big heart, with plenty to say!
He is survived by his wife Gladys; children: Dennis Kemnitz, Warren, Minn., Rick (Sheila) Kemnitz, Cavalier, N.D., Perry Kemnitz (Valerie Blomquist), Pembina, N.D., Sheila (Paul) Hartje, Bathgate, N.D.; grandchildren: Racheal (David) Thompson, Karla (Shaun) Bracken, Kari (Dario) Situm; Jered (Missy) Kemnitz, Nathan Kemnitz (Nicolle Sapa), Nikolas (Julie) Kemnitz; Gabriel Hartje; step-grandchildren: Zachariah and Elijah Hartje; great-grandchildren: Shane and Dax Thompson, Josie Bracken, Lukas Situm, Madison Bergman; Ryker Kemnitz, and Aubree Kemnitz; godchild, Tricia Bates.
Preceding him in death were his parents; infant son; grandson, Shaun Michael Kemnitz; brother, Donald Kemnitz; godchild, Jerry Kain.