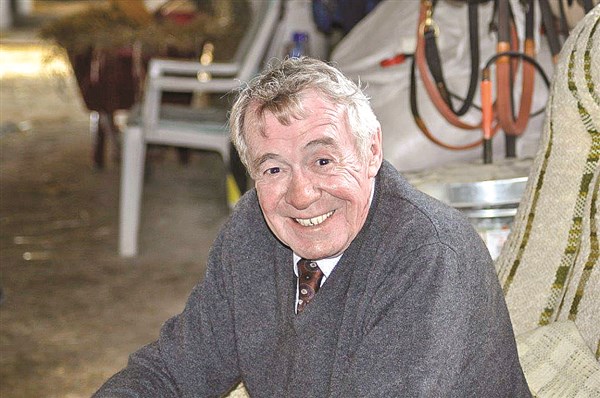 Garylle Stewart, 76, passed away peacefully Monday, August 1st at the Villa Maria Nursing Home, Fargo, N.D. with his family by his side.
Gary was born on April 21, 1940 in Humboldt, Minn., the son of Glen and Melvy Stewart. He attended school in Humboldt and spent much of his childhood at the horse-racing track where his Dad owned and raced horses.
Gary graduated from high school in 1958 – his class was only the second high school class in the history of Humboldt, a town in Kittson County on the Canada border. A prolific reader, he received an award from the school for reading every single book in the library!
In the mid-1950s, Stewart was a jockey and rode in the local fair circuit. Once he got a little older, though, he left the riding to his brother, Bob, and focused instead on training horses.
In 1959 he married his high school sweetheart Marian Windt and started college at Moorhead State University.
By 1960 Stewart was drawn back into horse racing – partly because he loved it, partly because this was the only way to pay for school.  By 1962, he had several horses of his own, and before long was making money off of them.  He was a full-time student during the spring and winter quarters and off to Canada, Ohio, Kentucky and West Virginia to train horses during the summer and fall.   His horse Poetic started winning stakes races which enabled him to go to law school which he began in 1964 even though he hadn’t yet earned his undergraduate degree. He promised to eventually finish the remaining four hours he failed to complete, and the school waived his undergraduate requirements.
He graduated from the University of North Dakota School of Law in 1967 and then served as a law clerk for the North Dakota Supreme Court for year before joining Wayne Solberg in practice in 1968.
For years, Wayne Solberg, law firm founder, was the lead city attorney and Stewart his backup but when Solberg retired in 1997, Stewart took over.
He served as City Attorney for years handling a wide range of issues on behalf of the municipality, including eminent domain actions, federally-funded buyout programs and day-to-day legal advice to city officials.
He served on the liquor control board from 1968 to 2015, helping draft many of the Fargo Liquor Laws.
At his own firm, his areas of concentration were municipal law, real estate transactions, estate planning, wills and probate.
He served on the Volunteer Lawyers and Lawyer Referral Committee for the State Bar Association of North Dakota. Stewart was the senior partner of the Solberg, Stewart, Miller Law firm.  He was named Boss of the Year 2005-2006 by the NALS, an association of Legal Professionals of Fargo Moorhead.
In the early 1990s, Stewart won three awards from the North Dakota Bar Association for his dedication to providing equal access to justice.
Gary was also attorney for the Fargo Hector Airport from 1969 to the present. He was a member of the El Zagel Shrine and Masonic Lodge.
In 2001, Stewart helped save the old Surety Insurance Office building that was located on 8th St in Fargo from demolition and then transformed it into a second office for the law firm. Gary received many awards for his pro-bono work he had done for nursing home residents.
He enjoyed buying and restoring old cars, especially 1950 Ford vehicles, mainly the Ford Crestliner.  He also enjoyed his extensive HO train set and spending time at his cabin on Little Detroit Lake and the horse track. He and his friend and former horse trainer Murray Duncan decided to get back into horse racing in 2010 and the horses are currently running at Assiniboia Downs in Winnipeg, Manitoba, Canada.  He enjoyed having lunch at Rick’s Bar and then stopping at the Am Vet’s on his way home at night.
Gary touched many lives in the local law business, city and airport business. He was a hard worker who could often be seen working late at night by the big picture window of his law office.  He was brilliant, unpretentious and was a friend to all. Once you met him you would never forget him.
Gary was preceded in death by his parents and brother Robert, fiancee Judy Cooke.
He is survived by daughters Elizabeth and Audrey Farol; special son-in-law Brian; grandchildren Ryan (Kayla) and Aaron Young, Alissa Olson (Dustin); great-grand-daughter Ava; brother Wayne (Renee) of Lancaster, Minn.; sister Susan (Terry), White Bear Lake Minn.; special ex-brothers-in-law Bill (Brenda) Windt, Jerry (Adda); Don (Jolene) Windt and ex-sister-in-law Dorothy (Del) Davis and Linda Easter; nieces and nephews, Lance (Bobby) Stewart; Ashley (Shelly) Larson, Ben (Rose) Larson, Chad Larson, Dan (Tiffenie) Larson, Shawn (Carrie) Stewart; David (Cindy) Stewart, Lori Fodness, Laurie Windt, Jerry Windt Jr, Brad Davis, Jamey Windt, Brendan Windt, Andrea (Stan) Antonelli and many cousins and close friends.
The funeral service was held at 11 a.m. with visitation one hour prior to the service Saturday, August 6, 2016 at Lutheran Church of the Good Shepherd, Moorhead, Minn.
Burial took place at 2 p.m., Sunday, August 7, 2016 at Pembina Cemetery, Pembina, N.D.
Arrangements were entrusted to the care Bougler Funeral Home and Celebration of Life Center.
To sign the online guestbook, go to www.boulgerfuneralhome.com.