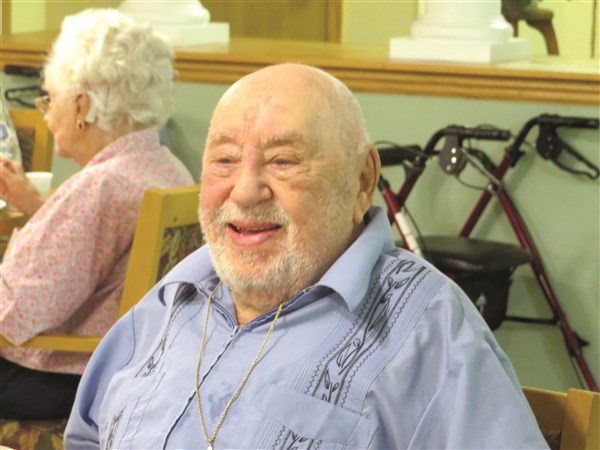 Walter Schmidt, 104, a longtime resident of Hallock, Minn. passed away at Karlstad Healthcare Center, Karlstad, Minn., Monday, August 22, 2016.
He was born in Milwaukee, Wis., November 1, 1911 to Eleanor and Herbert Schmidt.  Walter lost his father in WWI.  Walter met and married his wife, Elizabeth in 1936 in Milwaukee while both worked at a book binding company.
During WWII Walter worked at an airplane factory.  He loved to tell stories about what went on there, and the time President Roosevelt toured the plant.
In 1948 Walter and Elizabeth moved the family to Southern California.  He owned a gas station for a time and also worked at General Motors. He lost Elizabeth to cancer in 1953.
In 1964, Walter met and married his second wife, Ruth.  They settled in Santa Cruz, Calif., and lived there until Ruth’s death in 1993.
After Ruth’s passing Walter moved to Hallock to be near his daughter, Phyllis and her husband, Bob.
He is survived by three daughters; a son and numerous grandchildren and great grandchildren.
Graveside services were held Monday, August 29, 2016 at 2 p.m. in Greenwood Cemetery, Hallock, with Rev. Galen Nordin presiding.
Many thanks to those at the nursing home who cared for Walter during his last days.
Austin Chapel, Hallock, were in charge of the arrangements.