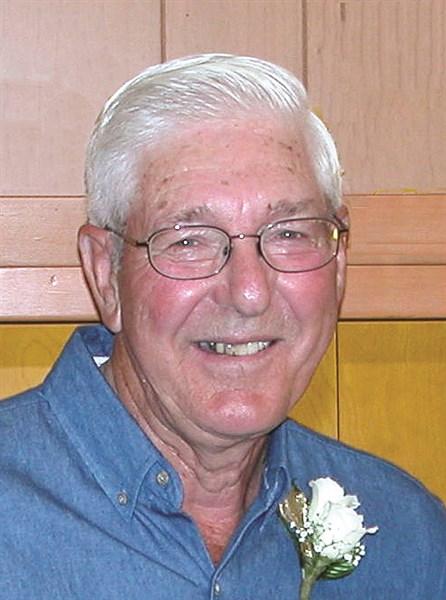 Ray L. Johnson, 83, Lancaster, Minn., passed away Sunday, September 11, 2016 at the Kittson Memorial Healthcare Center, Hallock, Minn.,  after a brief battle with cancer.
Ray Lowell Johnson was born November 12, 1932 in Cannon Township, Kittson County, Minn. to Oscar and Karin (Carrie Johnson) Johnson. Ray was baptized at Sion Lutheran Church in Lancaster. He graduated from Lancaster High School in 1951.
After graduation, he went to work on the family farm with his father. He served in the U.S. Army in Germany. He was united in marriage September 5, 1953 to Lillah Mardell Goodrich at Zion Lutheran Church, rural Greenbush, minn. Ray and Lillah farmed for a number of years with his parents. They later purchased the farm and raised Registered Polled Hereford cattle. During that time they held several production sales on their property which were attended by buyers from Canada and several states.
In April of 2007, the farm was sold, and they built a home in Lancaster where Ray lived until being hospitalized. Ray was an active member of Sion Lutheran Church and served on the church council. Ray was a member of the Cannon Township Board for 50 years, serving as Treasurer and Chairman of the Board. He also served on the Lake Bronson Farmers Union Oil Company board for 18 years.
In 1991 Ray and Lillah were honored with being named the Valley Farmer and Homemaker. Ray was also very active with the American Hereford Association, the Minnesota Hereford Breeders and the Northwest Stockmans Association.
In 1995, he was recognized in the American Polled Hereford Assoc-iation Hall of Fame for his outstanding contribution to Polled Herefords.
On numerous occasions, his cattle have been awarded Benchmark Dam status by the American Polled Hereford Associa-tion. He spent many years as a member of both the American Legion and Lancaster Lions and was awarded the 100 Percent Club President Award. He kept progressive whist going in Lancaster, first at the Legion and then at the Diner.
Ray is survived by four children and their spouses, Lowell Johnson and Diane (Missy) McFadden, Minneapolis, Minn.; Karen Johnson, Thief River Falls, Minn.; Kevin Johnson and Carol Beecher, Lancaster and Michelle and Nasir Mukhtar, Houston, Texas; grandchildren, Carrie (David) Edmondson; Christopher (Ashley) Johnson; Zak Mukhtar and Sophia Mukhtar; six great-grandchildren; a sister Pat Michel, Moorhead, Minn.; a sister-in-law Nellie Storhaug, McIntosh, Minn., and many nieces, nephews, other relatives and friends.
He was preceded in death by his parents, wife, a daughter-in-law, Paula (Grube) Johnson; brother Ronald; sister, Phyllis and brothers-in-law, Warren Spilde, Haldor Goodman and Kenneth Michel.
Funeral services are scheduled for Saturday, September 17, 2016 at 11 a.m. in Sion Lutheran Church, Lancaster. Interment will be in Riverview Memorial Garden Cemetery. Military honors will be accorded by the Lancaster American Legion Honor Guard. Visitation will be held at Austin Funeral Chapel, in Hallock on Friday evening from 6 to 8 p.m. with a prayer service at 7 p.m.