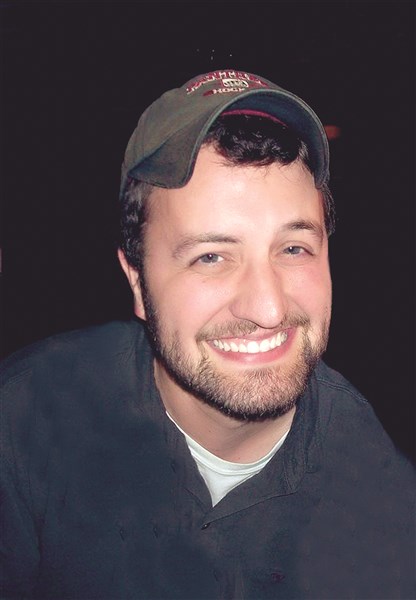 Brian Alexander, 37, Oakdale, Minn., passed away Wednesday,?Oct. 12, 2016.
Brian was a renaissance man. You could often find him drawing, painting, woodworking, quoting movies, building computers, getting philosophical with George Carlin, playing Legos, watching Xena the Warrior Princess, listening to Irish Punk Rock and Golden Oldies, playing tennis and hockey. Brian knew everything about hockey. Brian was a goalie – the sanest ones, and you could tell on the tennis court when people would rip balls right at his face. He’d calmly volley the ball, tap the net twice, and prepare for the next point.
Brian went to NDSU – Go Bison. Majored in electrical engineering, and almost got his masters, but then learned he had to defend a thesis in front of others. So now his wife has to pay for his almost degree. He did get a second major…that is a Major of Chernobyl at Tailgators in Fargo.
Brian really loved his job. A controls engineer at NELA since 2006, Brian’s coworkers describe him as a good listener with an uncanny mind and a keen intellect. Despite rumors that Brian goofed around all day talking hockey and turning circuit boards into piles of molten plastic, sources confirm that Brian actually did work from time to time.
Brian enjoyed the outdoors – many summers spent on Boundary Water trips with his dad, brother, and lifelong friends.  Loved fishing, hunting or just sitting by a lake staring out and contemplating life.
Brian loved his “fruity drinks” and had a Sex on the Beach or something ending with “-tini” in his hand. He then developed a more sophisticated palate and moved on to Strongbow or a Sailor Jerry’s with Coke.
Brian was a man of few words and no enemies. He never complained. To know Brian is to know his smile, calm, and wit. This is how he approached life until the very end.
When cancer threw its worst at Brian, he would quote The Lord of the Rings and say, “You give hope to men. I keep none for myself.” The tumors stressed his body, but never his heart. He strengthened those around him even as he grew weaker.
Brian leaves behind parents Mike and Linda Alexander, brother Matt, dog Bracken, his clone – Eddie, and his beloved wife, Maureen (Eukel). He is preceded in death by “The Van,” a big rusty piece of crap that he drove around in high school.
Memorials can be sent to the Princeton, Minn., Youth Hockey Association in memory of Brian Alexander.