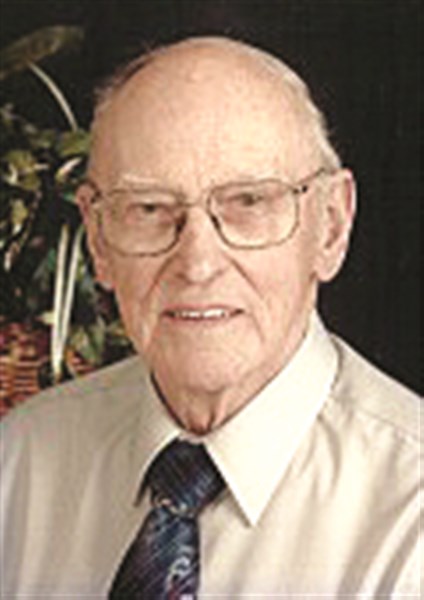 Lawrence V. Olson, Braham, Minn., went to be with his Lord on October 16, 2016 at the age of 96 years, 5 months and 20 days.
He was born April 25, 1920 at home in Deerwood Township in Kittson County, Minn., to Andrew and Alida (Skarp) Olson and was the second oldest of five children. He attended the Kittson County School thru 8th grade.
Lawrence worked as a meat cutter and clerk at Melvin’s Store, Stanchfield, Minn., for 25 years (where he was known as the ‘potato sausage’ maker at Christmas time) and in the maintenance department (with brother Reynold) at Grandview Christian Home in Cambridge, Minn., for 14 years.
He served as a 3rd class radioman in the US Navy at Guadalcanal during WW II and was honorably discharged in 1946.
Lawrence married Mildred Anderson on July 26, 1942 in Karlstad, Minn. They moved to the Stanchfield area in 1947 and became members of the Stanchfield Baptist Church Nov. 5 of that same year.
He was an active church member singing in the church choir for many years and singing ‘Swedish’ at many services including around 180 funerals. He was a prayer warrior, praying for all church members, family members and missionaries throughout the world. He taught his children to love Jesus, to love music and to serve others.
Lawrence was preceded in death by parents Andrew and Alida, brothers Gordon and Reynold, sister Doris (Erickson) and wife Mildred Olson.
He is survived by one brother Leonard (Betty) Olson; children Gareth (Diane) Olson, Naomi Johnson, Nathan (Mary) Olson, Philip (Kathy) Olson, Averyl (Dennis) Rude, Pat (Matt) Heuberger, 17 grandchildren, 16 great grandchildren and numerous nieces and nephews.
Special thanks to the Cambridge Hospital ICU staff for excellent care.
Funeral services were held Monday,?Oct. 24, 11 a.m. at Stanchfield Baptist Church with visitation one hour prior to the service at church.
Interment was at the Stanchfield Baptist Cemetery.
Rock-Ingebrand Funeral Home, Braham, Minn., was in charge of the arrangements.