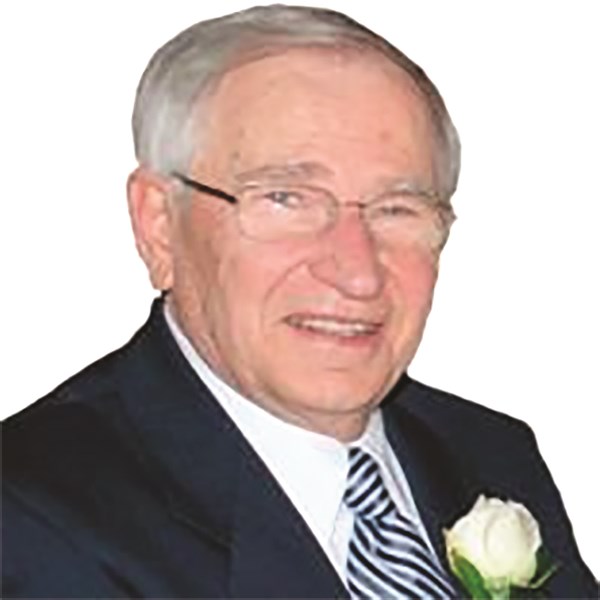 Roland Clarence Danielson, 84, Edina, Minn., went to be with his Savior and Lord on October 14, 2016 following a short battle with complications due to pneumonia.
Roland (Rollie) was born in Minneapolis, Minn., on December 15, 1931. Rollie attended Central High School, Minneapolis where he played hockey with the Central Blademen. He was a graduate of the University of Minnesota with a Business degree and was a Second Lieutenant in the Army.
Originally, Rollie was co-owner of U.S. Bench Corporation with his brother Woody, then with his sons, Scott and Troy. He was actively involved in the company until the time of his illness. He was proud that the business he began decades ago is still vibrant today.
At one time, Rollie was also co-owner of First American State Bank of Brownsdale, First American State Bank of Sargeant, and First American State Bank of Grand Meadow in southeastern Minnesota; being active in the banking industry for 30 years.
However, his heart was in farming. Rollie owned Pleasant Grove Farm, which was built by his grandfather in 1916, where he and his sons planted and harvested wheat in Kennedy, Minn. At the farm, it was always up at 6 a.m. everyday working, except on Sundays.
Along with his sweetheart, Shirley, Rollie had a passion for travel and visited all parts of the world. However, Rollie’s deepest love was for his Savior, Jesus Christ, and his family.
He attended every event he could with his grandchildren: concerts, ballgames, scout ceremonies, soccer games, and parades.
A nearly life-long participant at First Covenant Church in downtown Minneapolis, Rollie and Shirley had been recently attending Colonial Church.
He is survived by his loving wife of 57 years, Shirley, brother Dean (Dolly) Danielson, and brother-in-law Franklin Carlson. He is also survived by his children, Terri (Mark) Stromberg, Scott (Becky) Danielson, Troy Danielson, and grandchildren, Amy (Patrick) McDonald, Michael Stromberg, Ryan Danielson and Eric Danielson.
He is preceded in death by his loving parents Stanley and Esther, stepmother Alice, sisters, Lois Danielson and Marlys Carlson, and brothers, Stanford and Woody.
Visitation was held at Washburn-McReavy, Edina, Minn., from 4-7 p.m. Wednesday, Oct. 19. A memorial service was held at Colonial Church of Edina, Thursday, Oct. 20 at 11 a.m.
Memorials preferred to Friendship Place, a group home for disabled adults where Rollie’s grandson, Michael, resides. Friendship Place 135 Ash Street Lino Lakes, MN 55126. Peace to his memory!
Washburn-McReavy, Edina Chapel, was in charge of the arrangements.