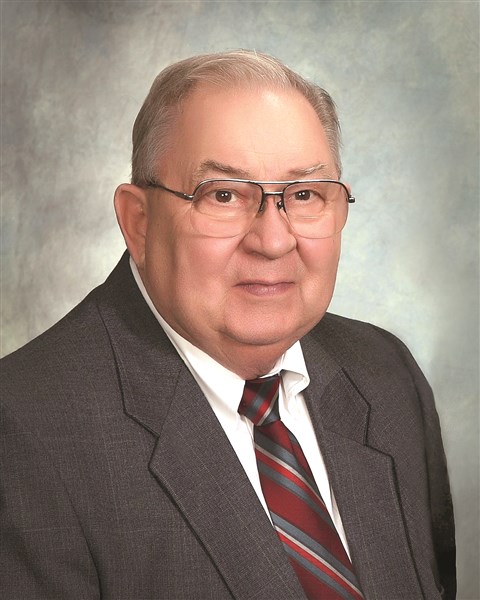 Duane Younggren, 82, Hallock Minn., passed away Sunday, November 6, 2016 at Kittson Memorial Healthcare Center, Hallock, where he received compassionate care and regular visits from family and friends.
Duane was born to Luke and Olive (Craig) Younggren December 2, 1933 and grew up in Northcote, Minn. He attended school in Hallock, graduated from high school in 1951, and helped on the family farm, where he cultivated a passion for farming.
Duane was drafted into the US Army and served from November 1956 through August 1958, including an assignment in France.
He married the love of his life, Melba Larson, December 29, nearly 60 years ago. They lived together in France, during Duane’s military tour.
Upon returning to the United States, they made their home in Grand Forks N.D., where he continued his education, started a family, and was later employed at the University of North Dakota (UND).
Duane completed an undergraduate and a Master’s degree in geography at UND. He furthered his education with doctoral studies in Indiana and Nebraska then later returned to UND where he was a professor of geography. While at UND, he taught courses in geography, meteorology and cartography. He assisted in designing a telescope and weather station for the University and also enjoyed a variety of activities through the community and the faculty club.
In 1974, after wrapping up his career as a geography professor and department head at UND, Duane and Melba returned to Hallock where Duane entered into full time farming. As he worked towards retirement from farming, Duane served as the Gambling Manager at the VFW in Kennedy, Minn. Duane’s interests were multifaceted and included airplanes, farming, teaching, photography, renovating, and family. Duane always enjoyed a good visit and a good drink.
Family members include his wife Melba, two daughters, Erin, who resides in Houston, Tex. with her husband, Scott Haugstad and their two sons Ryan (16) and Kyle (14), and Naomi, who resides in Erzenhausen, Germany with her husband Mark Weltz; and by his two sisters, Joan (Lowell) Gordon, San Francisco, Calif., and Fay (Earl) Ryden, Kennedy.
He is preceded in death by his parents.
Memorial services were held Saturday, Nov.12, 2016 at 2 p.m. in the First Presbyterian Church, Hallock. Military honors were accorded by the North Dakota National Guard and Kennedy Veterans of Foreign Wars. Rev. Marge Landwehr, presided; special music provided by Dane and Mitchell Ryden, Renee Wahl, Sue Albrecht, Jillayne Kraska, JoyBeth Olson and Val Blomquist.
Honorary pallbearers were Richard Gjovik, Gary Holm, Maurice Sugden, Rick Sugden and Wayne Westerson.
Austin Funeral Chapel, Hallock, was in charge of the arrangements.