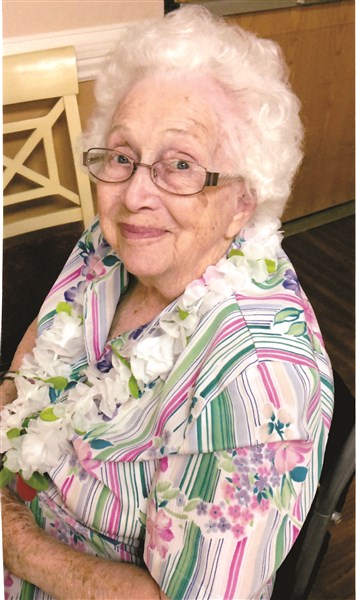 Ruby Rich Rodda, 92, left us Nov. 12, 2016 after a short illness.
Ruby was born Jan. 28, 1924, in Lake Bronson, Minn., to Bernard and Martha Locken. Ruby attended school in Minnesota graduating in 1942.  After high school, WWII was in full session so Ruby with several friends went to Southern California to work in a defense plant building aircraft for Northrup.  While there she met her first husband, Robert L. Rich.  They eloped and married in Arizona in 1943 and settled in San Bernardino, Calif., raising her family of five children.
Ruby was very involved in her church, being involved in various groups and especially in the church choir.  Ruby loved to sing and was actively singing until she passed away.  She would often break out in song during any lull in the conversation.
Ruby married her second husband, Walter Rodda, in 1994, moved to Seattle, Wash., for a few years and returned to Yuba City where she remained until her passing.
Ruby spent the last seven years as a resident of Emerald Oaks Assisted Living, Yuba City, Calif.  A special thank you is extended to the staff and administration for their care, compassion, kindness and professional treatment of Mom.   The family appreciates all of the extra effort.
She is survived by her five children, Bonnie (Lorin) Grahn,  Lake Bronson;  Robert (Eunice) Rich Jr., Lake Bronson; Bernard (Debora) Rich Wells, Me.; Bonnie Sloan (James Casner), Yuba City; and Tamara Rich, Pittsburg Calif.;  13 grandchildren, 20 great grandchildren, 12 great-great grandchildren, a sister, Lorraine Melin, a sister-in-law, Dorothy Locken and numerous nieces and nephews.
Ruby was preceded in death by her parents, a brother, Leo Locken, her first husband, Robert Rich,  her second husband, Walter Rodda, a grandson, Samuel Rich and a great grandson, Samuel Rich Jr.
A memorial service was held at First Lutheran Church, Yuba City,  Dec. 3, 2016 at 2 p.m.
Internment will be in Lake Bronson, MN in a private ceremony.
Suggested donations are to the First Lutheran Church Comfort Dog Program, 850 Cooper Ave, Yuba City, CA 95991