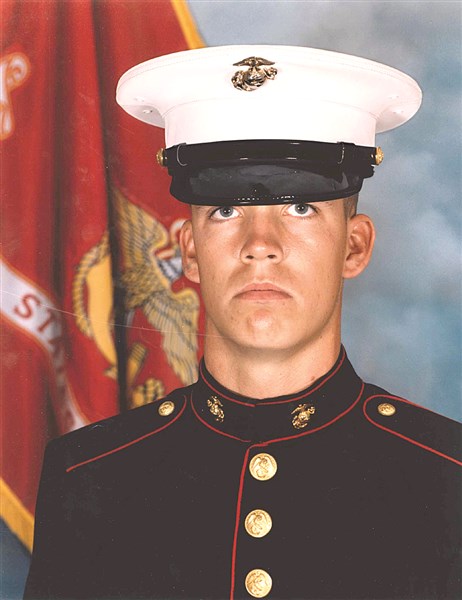 Christopher Dean Britten passed away Jan. 2, 2017 at the age of 41, at the Sanford Medical Center, Fargo, N.D. Christopher had been in a car accident Dec. 29, 2016.
Christopher Dean Britten was born June 3, 1975, to Carl and Carol (Renstrom) Britten. He was baptized and confirmed at First Lutheran Church, Karlstad, Minn. He attended school in Karlstad and graduated in 1995 from Tri-County High School.
Christopher served with the United States Marines and the MN Army National Guard. He was a Veteran of Bosnia and Operation Iraqi Freedom. He also helped with the wounded Warriors Guide Service.
Christopher worked for several building contractors in Bemidji. He worked for Wanzek Windblades in Colorado, Nebraska and Texas. At the time of his death he was working for Shoemaker Transport Specialist in Texas.
Christopher Dean Britten believed in living life to the fullest and he did just that. He brought joy and laughter wherever he was. He would jump on a flight home at any time to help out with family or friends. You could see pictures of him handing out candy to kids when he was in the military and just that little piece of candy brought so much joy. He would do anything for his three nephews Bjorn, Henry and Erick. He would take them snowmobiling, play farming, play games, go fishing and even bake cookies. He loved to share stories, jokes and always a big smile. Christopher has a family of extra special military buddies also. They could tell stories day and night about all their adventures. Chris was even a rodeo clown. He worked hard and played hard.
Christopher is survived by his father Carl Britten; brother Courtney Britten; nephews, Bjorn, Henry and Erick Britten; Godparent Jim Britten; Godson Bjorn Britten; Halle and Gavin Duray; several aunts, uncles, cousins, military family and many friends.
He is preceded in death by his mother Carol Britten; grandparents Earl and Marguiret Britten; Willard and Gladys Renstrom; Godparents Karen Britten and Tim and Leone Renstrom; and uncles and cousins.
Funeral services were held Saturday, Jan. 7, 2017 at 10 a.m. at First Lutheran Church, Karlstad. Visitation was Friday, Jan. 6, 2017 at the First Lutheran Church from 5 to 7 p.m. with a prayer service at 7 p.m. Visitation was also held one hour prior to the service on Saturday.
Rev. Mark Helgeland, presiding; Kirstin Olson, organist, Meridith Walton, soloist and Michael and Adam Thompson, duet. Honorary casket bearers will be all those in attendance. Military honors will be accorded by the Karlstad American Legion Post #445 and the Minnesota National Guard – Moorhead. Interment will be in the Minnesota Veterans Cemetery at Camp Ripley, Little Falls, Minn.
Carl and his family would like to thank you for your kindness and generosity during this most difficult time. We are so very grateful for your prayers and support.
Austin Funeral Home, Hallock, Minn., was in charge of the arrangements.