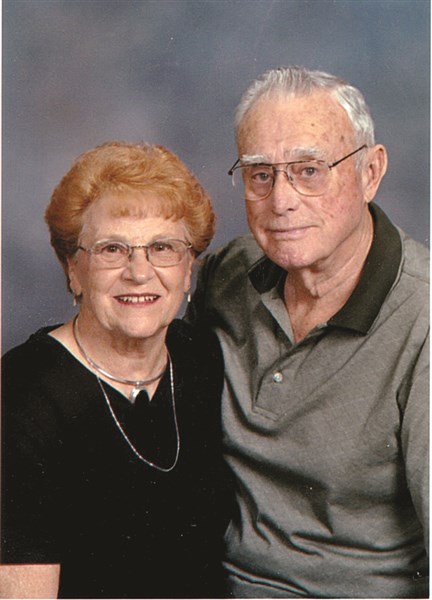 Bernice Reff, 87, passed away Friday, Jan. 13, 2017 in Missoula, Mont.
Bernice (Benny) Arlene Reff was born to Isaac and Cleo Beyer Sept. 2, 1929 in Bemidji, Minn., the seventh of nine children. Raised on the family farm in Guthrie Township, she attended the one room country school through 9th grade. She then moved to the “big town” of Bemidji and was a live-in nanny, working her way through high school. She met and married John (Jack) Reff, home after serving in the Navy during World War II. They were married for 60 years until his death in 2008.
Their three daughters were born in Bemidji. They moved to Wahpeton, N.D., while Jack attended the State School of Science. They then moved to Fergus Falls where Jack began working for Otter Tail Power Company. While there a son was born.
Benny and Jack moved their young family to Hallock, Minn. in 1955, where they resided for nearly fifty years. They enjoyed raising their family in a wonderful, small community.
In 2003, Benny and Jack moved full-time to their “winter place” in McAllen, Tex.
After Jack passed in 2008, Benny resided with her daughter, Stephanie and son-in-law, Wayne Thompson, in Missoula. She lived their for four years until it became necessary to place her in an Alzheimers care facility.
Benny is preceded in death by her parents, husband, Jack; daughter, Wanda (Wendy) Baruth and four siblings.
She is survived by daughters, Jeanne (Rich) Bates, Yucca, Ariz.; Stephanie (Wayne) Thompson, Missoula; son Kevin (Lois) Reff, Fergus Falls, Minn.; brother, Burnell Byer, sisters, Wanda Johnson, Ida Eller and Millie Adams. She is also survived by five grandchildren, 13 great grandchildren, two step great grandchildren and many nieces and nephews.
The family is grateful to Hospice and the staff at Edgewood Vista who were so kind and caring with Mom and the family. She also received special care from the Thompsons and extended family. The family is relieved Benny is free of Alzheimers at last and is with Jack and daughter, Wendy.