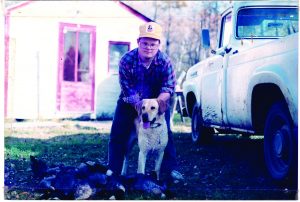 John Lyle Hanson, 54, Hallock, Minn., went on the eternal fishing trip Sunday, May 21, 2017. He had been a resident of the Kittson Memorial Nursing Home, Hallock.
John was born Feb. 15, 1963, to Harry and Wilma Hanson, Hallock, Minn. He attended the Hallock High School until 1982. After high school, he attended the DAC, Lake Bronson, Minn., where he enjoyed Special Olympics, making rugs, sweeping and setting the tables.
John loved to spend time with his family and had a great sense of humor. He enjoyed music, especially Tear for Fears and Band on the Run.
He loved his Coke, hamburger and fries, and was especially fond of chocolate of any kind.
While at home he liked to vacuum, mow and dry dishes. He loved to go fishing and hunting with his Dad and brother, Brian. He also enjoyed helping his brother, Brian, with beekeeping.
John is survived by his brothers, Brian (Jennifer) Hanson, Hallock; Michael (Cindy), Euless, Tex.; sisters, Gretchen (Brad) Bjerken, Felton, Minn.; and Kayla Hanson, Hallock; nieces and nephews, Bryce Bjerken, Hannah Hanson, Megan and Morgan Hanson, and Spencer Kushinski; and aunts and uncles.
He was preceded in death by his parents, his brother, Tim; and his grandparents.
Funeral services are planed for Wednesday, May 31, 11 a.m. with visitation one hour prior, at Grace Lutheran Church, Hallock.
Pastor Frank Johnson presiding, special music provided by the Grace Lutheran Church choir and Jillayne Kraska and Renae Wahl, organist.
In lieu of flowers, memorials are preferred to DAC, Grace Lutheran Church and Kittson Memorial Nursing Home.
Austin Funeral Chapel, Hallock, is in charge of the arrangements.