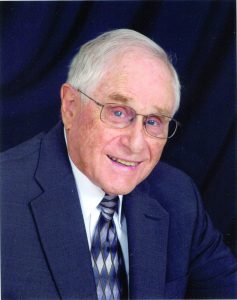 Lawrence “Larry” Fick, 98, Park Rapids, Minn., died Saturday, May 13, 2017 at his home in Park Rapids.
Lawrence Fick was born June 22, 1918 on the family farm in Kittson County, Minn., one of eight children of Albert and Martha (Kuball) Fick. He grew up on the family farm working hard to survive, helping with chores and attending a close by local country grade school. Subsistence hunting for deer, grouse, squirrel, rabbits was common. In 1929 his father died, and it was a challenge to attend school and continue to farm. Attending high school in Lancaster, Minn., 16 miles from the farm, without school buses his mother paid for him to board in town and attend school. Shortly after his sophomore year, his mother died suddenly. With the generosity of a local couple who needed help with their restaurant in town, Lawrence boarded with them and was able to finish high school, graduating in 1937. While in high school he also worked part time for Andrew Clay who owned the local drug store. This relationship would introduce him to his future career in Pharmacy. He went on to attend NDSU Pharmacy School and began working as a pharmacist in Devils Lake, N.D.
He was united in marriage to Grace Jamieson Nov. 11, 1944 in Fargo, N.D. In 1946, Mr. Clay proposed a partnership offer for Lawrence to operate a drug store in Park Rapids. He accepted the offer and moved to Park Rapids with Grace. They continued the partnership until 1966 when Larry purchased all ownership. Larry operated Fick Drug Store in Park Rapids until his retirement in 1983.
Larry and Grace were blessed with two sons, Jeffrey and Scott. Grace passed away in 1985. Larry was united in marriage to Barbara M. Wenner April 30, 1988 in Ham Lake, Minn.
Larry served on the board of directors for many local organizations including St. Joseph’s Hospital, State Bank, River Heights Apartments (HUD), Park Rapids Library, and the Bethel Lutheran Cemetery.
He was a longtime member of the Park Rapids Lions Club (Melvin Jones Fellow) and Calvary Lutheran Church. Larry enjoyed hunting, fishing, golfing, biking and traveling.
He is survived by his spouse, Barbara M. Fick, Park Rapids; his son, Jeffrey (Sally) Fick, Woodland Hills, Calif.; his sister, Velva Larter, Hallock, Minn.; his brother-in-law, Edward (Gail) Wenner, Hector, Minn., and several nieces and nephews.
He was preceded in death by his first wife, Grace; his infant son, Scott; his brother, Victor and sister, Violet and four infant siblings.
Funeral services were held Friday, May 19, 2017 at 11 a.m. at the Calvary Lutheran Church, Park Rapids. Visitation was held Thursday evening May 18, 5-7 pm at the Cease Family Funeral Home, Park Rapids. Visitation was also held one hour prior to the services at the church. Pastor Steve Norby officiated.  Interment will be held at the Greenwood Cemetery of Park Rapids.
Larry’s family suggests memorials to Calvary Lutheran Church or the charity or organization of the donor’s choice.
Arrangements were handled by the Cease Family Funeral Home, Park Rapids. Friends may view obituary and leave condolences at ceasefuneralhome.com.