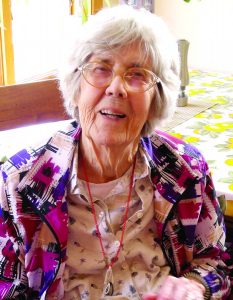 Aileen Olson passed away June 1, 2017 at Gracewood Senior Living, Highland Park, Minn.
Aileen Theodora Olson was born March 29, 1920 to Ole and Agnes Messelt on the farm outside of Winger, Minn., where her Grandpa Berger was her nanny.  As a young child she was severely affected by asthma.  She struggled to survive, and when she matured and her symptoms became manageable, she saw hard work as a gift rather than a burden.
She was united in marriage May 10, 1940 to Arnold S. Olson in Winger.  While Arnold served in the European theater during WWII, and with two children to raise, she waited in Winger. Arnold returned, wounded and decorated, and began working as manager of Winger Cooperative Oil Association.  In 1946 the family moved to Hallock, Minn., where Arnold became the manager of Midland Cooperative Service.
Aileen was active in church and community activities.  While managing a large family, she was a faithful volunteer, an avid reader and bridge player, a gentle spur to her six children, and a wonderful partner to Arnold for over 74 years.  She did professional catering, raised large gardens, attended her first college study in her early 50s and received her registered nursing degree and license.
In their long and healthy retirement Arnold and Aileen traveled and wintered in Mesa, Ariz.  Her cooking and baking were family legend, and her recipes survive her. One of her memorable tricks was to get up early on days she was to drive to Winger with a carload of kids so that she could sew matching shirts for everyone.
She is survived by six children: Dr. Stephen (Bonnie), Burnsville, Minn; Susan Tufford, Crystal Minn;  Craig, Red Wing, Minn.; Dr. Mark, Scottsdale, Ariz.; Dr. Chris (Cheryl), Brownsville, Tex.; Jonathan, Minneapolis, Minn.; brothers Roy and Jim;  10 grandchildren and 18 great grandchildren.
She was preceded in death by Arnold, her parents, brothers Orville and Myron, sisters Beulah and Florence, daughters-in-law Pat and Jeri.
A memorial service will be held at Cremation Society of Minnesota, Edina, Minn., Saturday June 10, 2017, at 2 p.m. Interment will be at Fort Snelling National cemetery.