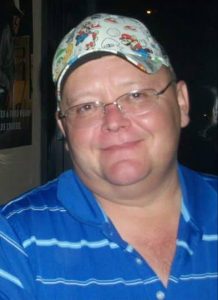 Steven Thomas Ekholm passed away July 8, 2017, at the age of 55, at Abbott North-western Hospital,   Minneapolis, Minn.
A graveside memorial service will be Sunday, July 16 at 2 p.m. at Riverview Memorial Gardens,  Lancaster, Minn., with a gathering for family and friends afterwards at the Olsonoski residence at 201 Alaska Street West,  Lancaster, Minn.
Steve was born in Lanesboro, Minn.,  July 27, 1961. At the age of one, the family moved to Donaldson, Minn. While growing up in Donaldson, he attended school in Stephen, Minn. and Kennedy, Minn. He enjoyed many activities including football, fishing, hunting, skiing, demolition derbies, listening to music and loved working on his Gran Torino.
After graduating high school in 1980, he attended Northland Community and Technical College in Thief River Falls, MN where he studied auto mechanics and played football.
In 1986, Steve married Marcia Slominski where they gave birth to two daughters, Bobbie and Brittney. During their years of marriage, Steve worked for Hill’s Plumbing and Heating in Bemidji, Minn. After getting divorced, Steve and his daughters moved to Donaldson, Minn., where he started up his own plumbing and heating business, owned a café in Karlstad, Minn., and took over Nordic Korner in Donaldson after his parent’s passing.
In 2001, Steve and his daughters moved to Grafton, N.D. where he worked for Kutz and O’Brien until retiring a few years later due to health issues.
In 2010, Steve moved to Minot, N.D. to be closer to his granddaughter, Athena. During the last seven years, Steve dedicated his life to his granddaughter, spending all his free time loving and spoiling her.
Steve’s focus in life was his family. He took every initiative to find a way to keep in touch with everyone, far and wide. He was an amazing cook and a great person to know and love. He will truly be missed.
Steve is preceded in death by his parents, Anna Louise Davis, Lawrence Edward Ekholm and Arlo Rhodes Davis.
He will forever be remembered by his daughters Bobbie (Michael) Buseth of Minot; Brittney Ekholm, Grand Forks, N.D.; granddaughter Athena Buseth, Minot; siblings Debbie (Chuck) Olsonoski, Lancaster; Judy Curry, Fargo, N.D.; Sue Curry, Wannaska, Minn.; James Ekholm, Alvarado, Minn.; Sandra (Tom) Heffernan, Jamestown, N.D.; along with numerous aunts, cousins, nieces and nephews.