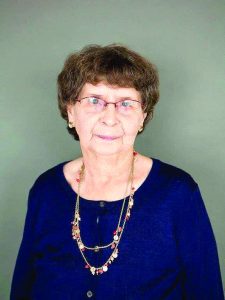 Verna Gunnarson, daughter, wife, mother, grandmother and great-grandmother passed away peacefully July 8, 2017 at the Kittson Memorial Nursing Center with loving family and the caring nurses at her side.
Verna Syverina Wright was born in Walhalla, N.D. November 26, 1933 to Curtis and Mabel (Hiller) Wright.  She lived in Walhalla until the age of 15 when the family moved to Warroad, Minn.  She married Merle Gunnarson  September 29, 1951 at Warroad and they had four children.
Merle and Verna bought land and built a home in Arveson Township north of Karlstad.  In 1968 they relocated to a farm in Deerwood township along highway 59 between Karlstad and Halma, where they made their home for 33 years.  After Merle’s passing in 2001, she moved to Hallock to be closer to her daughters.
Verna was a homemaker and helper to her husband on the farm.  She had a love for flowers of all kinds, no matter what the season. She was an avid bird watcher.
She loved to travel and after quite a few tips exploring the many states with Merle, they decided that Arizona was where they would like to winter. They spent many years there enjoying the weather and the many friends that they made.
What Verna enjoyed most in life was being a mother, a grandmother and then a great grandmother.
Verna is survived by her sons Larry, Halma, Minn.; LaMar (Kay), Alexandria, Minn.; daughters Connie (Kevin) Swenson, Peoria, Ariz.; Cathy (Kevin) Waller, Hallock, Minn.  Grandchil-dren, Micheal Gunnarson, Michelle (Darin) Warnke, Ethan (Julie) Gunnarson, Ashley Gunnarson, Matthew (Laura) Capelle, Staci (Nick Locken)  Gunnarson, Kendrah (Barrett) Germundson,  Kristyne (Jeff) Duray, Katelyn Swenson, Tanner (Ashley) Swenson, Courtney (Chris) Matzke, Justine (Taylor) Anderson, Bradley (Janie Bergh) Waller, Katie (Mitch) Maaninga, Kelsie (Brian Torgerson) Waller; 25 great grandchildren; brother Alvin Wright; sisters in law, Joyce Wright, Gloria Wright, Shirley Gunnarson, Ida (Lawrence) Heuchert, Darlene (Lyn) Zaugg; brothers in law, Ben (Marilyn) Gunnarson and Donald (Norma) Gunnarson; in addition to many nieces and nephews and other relatives.
She was preceded in death by her husband Merle, her parents, brothers Lyle, Larrie and Wilbur Dean and grandparents.
Funeral services were held Thursday, July 13, 2017 at 11 a.m. in Zion Lutheran Church, Lake Bronson, Minn. Interment was in Riverside Cemetery, Lake Bronson. Visitation was held at the church for one hour prior to the service. Pastor Kathy Levenhagen, presided. Special music was provided by the Popple Ridge Pickers. Casket bearers were Verna’s grandchildren.
Austin Funeral Chapel, Hallock, was in charge of the arrangements.