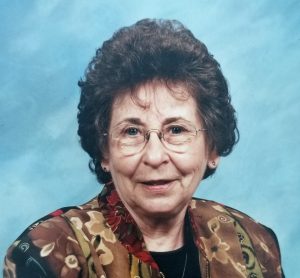 Tessie Dahlman, 88, Bemidji, Minn., and formally of Lancaster, Minn., peacefully passed away at her sons home surrounded by her loving family Sunday, July 30, 2017.
Tessie was born Dec. 17, 1928, at home in Orleans Minn., delivered by her grandmother, Elizabeth Steinert. She was the second child of Victor and Clara Jaszczak. She attended Orleans elementary school and Lancaster High School graduating at age 18 in 1947.
After graduating she went by train, escorted by her sister Ida, to Minneapolis for a psychiatric nursing program. Her father, Victor, did not want her to go alone so bought her sister, Ida, a train ticket to escort her and help her settle in. Once this was accomplished, Ida came back only to miss the first day of her senior year. At the time, Ida wasn’t very happy about it but I do believe she got over it. They were a year apart and close all their lives.
After her year in Minneapolis, Tessie headed to California in the Bay City area, where her Aunt Helen lived, to take a job as a psych nurse. She was hired, by our surprise, after she told the interviewer that she wouldn’t work on Sundays because she had to go to church. The gentleman who interviewed her admired her strong conviction of faith. He told her she could work at 12:00 on Sundays so she never missed mass. Some of the things she did during her employment there was shock therapy and ice baths. Things that are barbaric and inhumane in nature now but were routine treatments at the time.
After a year or two, Tessie moved to Hawaii for a couple of years then moved on to Memphis, Tenn. She loved to travel and meet new people. In Tennessee while Tessie continued to work and study nursing, getting her three year diploma degree from St. Joseph’s Hospital in 1957, she met and cared for a young Elvis’s ailing mother when he was just becoming popular. She had continued to donate to the hospital which is now affiliated with St. Jude’s Hospital. Among her other interests in Memphis she owned and operated a bowling alley and restaurant.
In 1957, Tessie moved back to Kittson County where she grew up and then made her permanent home. She got a job with the Hallock Hospital and enjoyed delivering babies and working with Dr. Larter. She met her husband Earl Dahlman, who worked as the manager of the Lancaster Co-op. They married Aug. 23, 1958 and had five children: Paul, Cathy, Philip, Richard and Mary. Philip preceded her in death in 1980. Earl preceded Tessie in death May 1994.
After working in the Hallock Hospital, Tessie moved on to work for Head Start doing screening for children. She was then offered a job with the Crippled Children Services which is now the Minnesota Dept. of Health.
The opportunity to relocate with the Dept. of Health in the 80’s brought her to Bemidji. She eventually retired from the Dept. of Health at the age of 66 and was excited to become more involved in the church (St. Phillips). She went to daily mass, prayed the rosary and prayed often for everyone. She was an avid volunteer and took patients to dialysis and other medical appts.
Tessie developed Alzheimer’s disease about 10 years ago and has had wonderful care from her four remaining children and grandchildren. Despite the failing, she was always smiling, funny, fun to be around, and a joy to be with.
She had many caretakers that helped the family and treated Tessie with respect. They laughed, hugged, danced and joked with Tessie. They are so very appreciated as the family could not have done it without them: Patty, Lisa, Kim, Lonna, Linda, Mary and Jenny. God bless you all.
Tessie’s claim to fame was her caregiving and love shown to family, friends and community. She encouraged and produced four nurses in the family (Cathy, Chris, Paula, Mary) totaling 116 in combined years of nursing skill. She was undyingly supportive of education and helping people reach their goals. She lived her life with hopes and dreams of making the world better and she definitely accomplished this.
Mom, we love you and will forever miss you! Your beloved family thanks you for the path you provided for us.
Funeral services were held Friday, Aug. 4, 2017 in St. Patrick’s Catholic Church, Hallock, Minn. Interment was at Riverview Memorial Garden Cemetery, Lancaster.