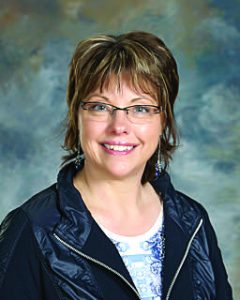 Karen Ann Vold went to meet her Lord and Savior on Sept. 11, 2017 and joined her father and brother in God’s Kingdom. Karen passed away at Sanford Palliative Care Center, Fargo, N.D. after a seven month battle with cancer.
Karen Ann Peterson was born and baptized Aug. 29, 1958 at Kittson Memorial Hospital, Hallock, Minn., to Philip and Marlyce (Younggren) Peterson. Karen attended school in Hallock where she was very active in band, choir and many other activities. She graduated with the Hallock High School Class of 1976. She attended Moorhead State University in Moorhead, Minnesota from the fall of 1976 until the spring of 1981 when she graduated with a double major in music and elementary education. Karen was very active in choir and other musical groups while at MSU. She even traveled to parts of Europe with some of these groups.
On June 23, 1979, Karen was united in marriage to Mark Otterson at Grace Lutheran Church, Hallock. This union would see the birth of three children, Karen’s pride and joy, Michael, Jonathan and Jaclyn.
Karen started her teaching career in the fall of 1981 at Hawley, Minn., teaching kindergarten through 6th grade music. In the fall of 1982, she joined both of her parents as an employee of the Hallock School District, which later became a part of the Kittson Central School District. Karen taught a variety of classes during her 35 years of employment there, but was a music teacher for the majority of them. While Karen directed many different choirs and groups from kindergarten to high school, her crown jewel was the yearly elementary Christmas program. With the help of her family, school staff, student’s parents and grandparents, Karen put together some very extravagant programs in front of full gymnasiums.
Karen was a very active lifelong member of Grace Lutheran Church where she received her first communion and was confirmed. She was a member of several choirs and singing groups as a child and adult. She even directed some of these groups at different points in her life.
On December 28, 1996, she was united in marriage to Joel Vold at Grace Lutheran Church. Karen’s passions include her children, grandchildren, her faith and singing. She was involved in different singing groups through the years. Most notably the Peterson/Swanson Family Singers and Seed of Faith.
Karen is survived by and will be missed by her husband, Joel; sons, Michael (Breanna) Otterson, Scottsdale, Ariz. and Jonathan (Ashley) Otterson, Grafton, N.D.; daughter, Jaclyn (Brent) Huebner, Morris, Minn.; grandchildren, Harper Otterson, Scottsdale, Maxx and Eva Otterson, Grafton and Braeden and Zachary, Huebner, Morris; her mother, Marlyce Peterson, Hallock; sisters, Jillayne (Brian) Kraska, Hallock and Kimberly (Ryan) Siegmund, Hoschton, Ga.; mother-in-law, Sharon Vold, Graceville, Minn.; five sisters-in-law; four brothers-in-law; and numerous nieces, nephews, aunts, uncles and cousins.
Karen was preceded in death by her infant twin brother, Keith; father, Philip and father-in-law, Kenneth Vold.
Funeral services are scheduled for Friday, Sept. 22, 2017 at 11 a.m. in Grace Lutheran Church, Hallock. Visitation will be held at the church Thursday, Sept. 21st from 6 to 8 p.m. with a prayer service at 7 p.m. Rev. Kenneth Losch and Rev. Galen Nordin, presiding; Renee Wahl, organist; Annaliese Johnson, soloist and Grace Adult Choir. Honorary pallbearers will be Karen’s grandchildren, Harper Otterson, Maxx Otterson, Eva Otterson, Braeden Huebner and Zachary Huebner.
Austin Funeral Chapel, Hallock, is in charge of the arrangements.