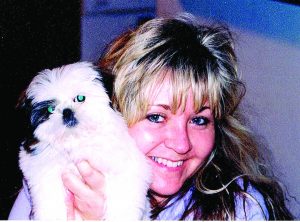 On Saturday, Sep.30, 2017 at 2 p.m. at the Lancaster Covenant Church, Lancaster, Minn., there will be a celebration of life service for Dawn Joy Carlson. Interment will be in Riverview Memorial Garden Cemetery, Lancaster.
Dawn was born April 8, 1970, the daughter of Duane and Darlene Carlson and grew up in Lancaster. She graduated from the Lancaster Public School in 1988.
While attending school Dawn was active in sports and excelled in golf where she played at the state tournament.
In her lifetime Dawn also attended several secondary schools and programs and she graduated from Northland Community College then went on to attend the St. Cloud University, she played on the women’s golf team for both colleges.
Dawn had worked many jobs during her life, she had worked as a nanny, waitress, bartender, golf course maintenance worker and in the pro shop, at a wood manufacturing plant, and bank teller to name a few.
One of the highlights of Dawn’s life was passing the playing ability test (PAT) to become a golf pro in 2001 when she was working in her chosen career at the Saint Cloud Country Club in the pro shop and in 2002 she took a job as the Assistant Manager/Head Pro at the Cuyuna Country Club in Deerwood Minn., for one year then moved to Twin Cities area in April 2003.
Dawn moved home to Lancaster in 2006 after resigning her job because of health problems. Dawn discovered the many health problems she had was from tick borne infections/lyme disease from a deer tick bite. She dedicated the rest of her shortened life to advocating for lyme disease awareness.
Dawn loved the outdoors, she had enjoyed golfing, hunting and fishing. Dawn also dabbled in painting, enjoyed playing cards and spending time with her dogs.
Family members that survive Dawn are her mother, Darlene Carlson, Lancaster; sister, DeAnn (Daniel Ekdahl) Carlson, Lake Bronson, Minn,; brother, Dean (Mary) Carlson, Lancaster; niece and nephews: Sondra Carlson, Kyle Carlson, Will Ekdahl and Seth Ekdahl.
She was preceded in death by her father Duane Carlson.
Austin Funeral Chapel, Hallock, Minn., is in charge of the arrangements.