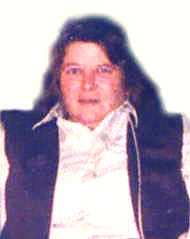 Brenda Lou Westman, 75 passed away Sept. 21, 2017 at Kittson Memorial Hospital, Hallock, Minn., with her two daughters and long time doctor and nurse by her side.
Brenda was born Nov. 27, 1941 in Bee Spring, Ken., the daughter of Gaudis Carroll. She attended a one room schoolhouse until the 8th grade and then went on to Kyrock High School. Brenda did various jobs while growing up, including working in the tobacco fields and stripping and hanging tobacco.
In 1961, Brenda and her son, Tommie Carroll, moved to Saunemin, Ill. She worked in Pontiac, Ill. at the coil factory for a number of years. During this time, Brenda also enjoyed league bowling with some of her co-workers and is where she met her future husband.
On June 18, 1967 Brenda married David Westman and from this union came four children. Dwayne, Rochelle (Rozella), John Russell and Davida. In 1978, they took their family and moved to rural Stephen, Minn., where they farmed until 2004.
Brenda was quite a gardener, always having two gardens every year. She canned almost everything, including various kinds of jellies. She did this up until the last few months of her life. Brenda loved to sew, quilt, knit, crochet and embroidery. She was also an avid bird watcher and loved to feed her feathery friends. Brenda loved books and the peace she got from reading. She was a very intelligent lady. Brenda loved hunting for Morel mushrooms and wild asparagus and going on picnics anywhere that seemed fit! Brenda loved the game show Jeopardy. When this was on, nothing else mattered! Brenda was an old soul, old fashioned and she made many friends along her journey in life.
Loving family members include her children, Allan Thomas Carroll (Frankie), Leitchfield, Ken., Dwayne Westman, Stephen, Minn., Rozella Eggerud (Michael), Thief River Falls, Minn., John Westman (Wendy), Stephen and Davida Westman (Luke), Fosston, Minn.; her siblings, Patty Stone (Arlan) and Sharon Carroll; grandchildren include, Erin, Morgan, Roxanne, Cory, Dyllon, Michaela, Kayla, Adrien, Devin, Alex and Sidney along with four great-grandchildren and many nieces and nephews.
Brenda is preceded in death by her husband David Aug. 1, 2006, mother Gaudis Carroll, brother Olathe Vincent, and sister Maxine Bullock.
Memorial services were held Monday, Oct. 2, 2017 at 11 a.m. in Teien Covenent Church, rural Drayton, N.D. Visitation was held at the church for one hour prior to the service. Rev. Steve Grosz, presided; Betty Dahl, organist.
Austin Funeral Chapel, Drayton, was in charge of the arrangements.