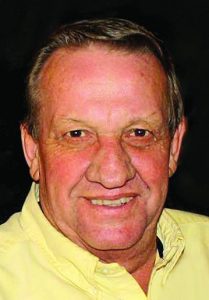 Dale Bernard Kuznia died at LifeCare Medical Center, Roseau, Minn., Oct. 15, 2017 under the compassionate care of their hospice team and hospital staff.
Dale was born July 26, 1948 to Bernard and Emily (Gryskiewicz) Kuznia in Warren, Minn. He was born into a large and loving extended Polish Catholic family and resided near Florian, Minn. Dale’s father Bernard died unexpectedly when he was 10 years old. Several years later his mother married Adrian Dolney, who was the best stepfather a young man could have. Emily and the kids moved to Greenbush to be with Adrian on the farm. Dale graduated from Greenbush High School, and then attended the University of Minnesota, Crookston.
While at Crookston, Dale met his best friend, Mary Wikoff. Dale and Mary married, and returned to live on the farm in Greenbush. Together, Dale, Mary, Adrian and Emily established D.K. Farms Inc. (Dolney Kuznia Farms). Dale and Mary have four children, Brandon, Ellie, Matt and Kara – all of whom were his favorite.
He was generous, had a booming voice and laugh, and loved to create memorable experiences for people. He enjoyed hunting, fishing, snowmobiling, traveling and camping. He loved farming. LOVED it. He and Mary farmed with Brandon, Matt and Kara, and Dale was very proud of this. Dale loved people, children in particular, and he was very proud that Ellie’s life work revolves around helping children. Dale loved his family with all his heart, and seemed physically incapable of saying “no” to his grandchildren – and if he could, he would have given them the sun and the moon. They were the joy of his life, and they will miss him dearly.
Dale was also strongly committed to his church, community, and school – and he lived that commitment through his actions. Dale was a “doer” who figured out how to overcome barriers to get projects done for the greater good. He was a humble person who tried his best to live his life with dignity and grace. He fought a very courageous battle against two rare cancers. Dale won his battle, as he never asked “why me?” and his faith in God only strengthened. Dale’s family would like to thank Dr. Potti and his team at the Cancer Center of North Dakota in Grand Forks in particular – they gave us more time with Big D then we ever thought possible.
Dale is survived by his wife of 46 years, Mary. Children: Brandon (Jessica) Kuznia, Greenbush; Ellie (Shawn) Anderson, Nevis, Minn.; Matt (Becky) Kuznia, Hallock, Minn.; and Kara (Shane) Nelson, Greenbush. Grandchildren: Mason, Ganon, Theron, and Raegon Kuznia; Conley and Sofia Anderson; Nora, Greta, and Blake Kuznia; and Adrian, Andre, and Oliver Nelson; sisters Marlys (Tom) Kittelson, Sauk Centre, Minn., and Sandra (Tim) Kasprowicz, Chaska, Minn. He is additionally survived by many beloved nieces, nephews, and cousins.
He was preceded in death by his fathers, Bernard Kuznia and Adrian Dolney; and mother, Emily Dolney.
Mass of Christian Burial was held at 10:30 a.m., Friday, Oct. 20, 2017 at Blessed Sacrament Catholic Church, Greenbush with Fa. Luis Buitron presiding.
Visitation was held at 5 p.m., Thursday, with a Prayer Service at 7 p.m. and Rosary to follow led by the Knights of Columbus at the church. Visitation was also held one hour prior to services at the church.
Interment services were held at Blessed Sacrament Catholic Cemetery, Greenbush, following services.
In lieu of flowers, memorial donations may be made to: Blessed Sacrament Church, Greenbush; the Greenbush Area Community Fund, the Greenbush-Middle River School District or a charity of your choice.
Arrangements are with Collins Funeral Home of Greenbush.
An online guest book is available at www.collinsfunerals.com