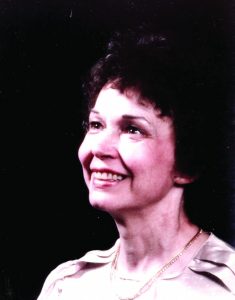 Lucille (Axelson) Dickelman, Woburn, Mass., passed away peacefully at the age of 87, Saturday, Sept. 9, 2017, at her son David’s house in Hollis, N.H. After an eight year courageous struggle with the ravages of Alzheimer’s disease, Lucille was, through it all, an inspiration to many.
Lucille was born Saturday, May 31, 1930, in Hallock, Minn., the daughter of the late Olof and Rena Axelson. She talked fondly of her days living in Hallock on their family farm and attending Grasshopper School, including riding back and forth by buggy or by sleigh.
Upon high school graduation, Lucille received a scholarship to study Laboratory Technology at the College of Medical Technology, Minneapolis, Minn. After becoming a certified lab technician, she accepted a position at the Neuropathology Dept. at the University of Minnesota.
While going to school in Minneapolis and working, Lucille also became a patient advocate for her older sister Martha who contracted polio while she was working with polio patients as a nursing student. When Martha needed an iron lung to help her breath, Lucille helped with a number of other people in obtaining one. She also visited and helped Martha as she spent months in the iron lung, a key intervention to saving her life.
Lucille married Ted Dickelman from Minneapolis, and they both moved out east to Massachusetts where he attended MIT. Lucille then got a job at Children’s Hospital in Boston where she proudly worked under Dr. Harry Shwachman who was a pioneer for cystic fibrosis treatment and who also developed the Sweat Test to help in diagnosing the disease. She later worked at the Holy Ghost Hospital Cambridge, Mass., and the Veteran’s Hospital, Boston, Mass.
Unfortunately when her marriage didn’t last, Lucille found herself raising her children as a single mother when her children were ages 5 and 2 years old. She briefly worked in the real estate business before she found a full-time job as a nanny where she enjoyed taking care of seven children and was able to bring her own two children to work as well. Once her children got older, Lucille returned to her work in histology and pathology at different hospitals, research centers, and for many years at the Symmes Hospital, Arlington, Mass.
Around 1984, Lucille started working in Marketing and Sales with a number of different companies, selling many different products. Her last job for many years involved the cell phone business during a period of tremendous growth in the industry. She was always dedicated and enthusiastic about her job and with her engaging and friendly disposition, she was often one of the top salespersons of the month, even until her retirement at 78 years old in 2009.
Lucille loved to travel to Minnesota to see her many relatives and their growing families. She would often travel to Hallock for special occasions, taking the train, plane, bus, or her own car across the U.S. or through Canada. Out east in New England, Lucille loved visiting the ocean, but she mostly enjoyed traveling to her cottage in Fryeburg, Me., which was only a five-minute walk from Kimball Lake.
Lucille’s cottage was a simple but sufficient chalet style structure with access to the beauty and quiet of Maine. She was able to spend one entire summer at the cottage in 2010 with her son, David, while he was working on cottage repairs, remodeling, and the installation of a point well. That summer was absolutely perfect weather and she could still enjoy her walk to the lake with its lovely mountainous views.
Lucille deeply loved her family and is survived by the following family members: her son. David Dickelman, Hollis, N.H.; and her daughter, Elizabeth Cianci and her husband, David Robinson, Mont Vernon, N.H.; Lucille’s six grandchildren and six great grandchildren: Mark (Nichole) Cianci and their children. Toryn, Jovan, Caed, and Kielle; Andrea (Casey) Conway and their daughter. Aria; David Cianci; Danielle (Matthew) Ezzo and their son Nolan; Michelle Cianci; and Rachael Cianci.
Her sister, Evangeline Gunderson, Carver, Minn., as well as many beloved nephews and nieces and their families, also survive Lucille. She was predeceased by her brothers David Axelson and James Axelson, and by her sisters Bernice Lee, Martha Walker, and Ruth Hansen.
The celebration of Lucille’s life was held Wednesday, Sept. 13, 2017, at the chapel of Merrimack Valley Baptist Church, Merrimack, N.H. Both of Lucille’s children, Elizabeth Cianci and David Dickelman, as well as her niece, Rebecca Gunderson Messenger, from Milwaukee spoke in honor of Lucille.
Lucille’s three grandchildren (Elizabeth’s children) played special music. “He The Pearly Gates Will Open” was played as a violin and cello duet by her granddaughters, Andrea Conway and Michelle Cianci. Lucille’s grandson, Mark Cianci, played his own piano arrangement of Lucille’s favorite hymn that he had often played for her, “My Savior First of All”. The memorial message was delivered Douglas Forbes, Jr., a lifelong family friend. Lucille and his late mother Pauline were close friends.
Interment followed with a graveside prayer in the small but beautiful North Cemetery, Hollis, N.H., a 5-mile drive from the church. Family and friends gathered afterwards at Elizabeth’s house in Mont Vernon, N.H., about nine miles north.
In Lucille’s memory, donations are being given to the Alzheimer’s Association at www.alz.org.