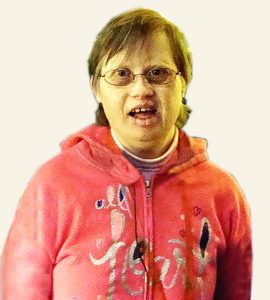 Kathryn Diane Peterson, 56, Karlstad, Minn. and formerly Kennedy, Minn., passed away Oct. 28 at her home in Karlstad.
Kathy was born in Hallock, Minn., Dec. 20, 1960 to Lloyd and Doris Peterson and grew up in Kennedy and attended Kennedy Public school. Later she worked at the DAC in Lake Bronson and the ODC and the DAC Thief River Falls, Minn. She was a member of Maria Lutheran Church in Kennedy and was confirmed by Pastor Wallace Leno. Most recently, Kathy lived in Thief River Falls and Karlstad.
Kathy was the center of the Peterson family and she brought joy to her parents, her brothers Rick and Larry, her sister Elizabeth, and her Uncle Willie. She will be remembered with smiles for her love of her dog “TooLoo,” “orange sticks,” ice cream with chocolate sauce, her microphone and Elvis, and in recent years, the faithful delivery of her Dilly Bars by brother Rick.
Family members include her brothers Richard and Larry, Kennedy, her sister Elizabeth (David) Fagerberg, South Bend, Ind., two nephews, Soren and Kaj (Jennifer) and grandniece Catherine.
Kathy was preceded in death by her father Lloyd, mother Doris, and two infant brothers, Larry and Peter.
Her family would like to offer a special thank you to Geri Benson of Thief River Falls for her many years of compassionate care giving; and sincere thanks to Katie Kline of Lutheran Social Services; and to Morgan Olson and the staff of LSS McKinley in Karlstad for their great kindness to Kathy up to the end of her life.
Funeral services are scheduled for Thursday, Nov. 2, 2017 at 2 p.m. in Maria Lutheran Church, Kennedy. Interment was in Red River Lutheran Cemetery, rural Kennedy. Visitation was held at the church for one hour prior to the service. Pastor Kathy Levenhagen, presiding; Erik Finney, soloist and Kirstin Olson, organist. Casket bearers were family and friends.
Austin Funeral Chapel, Hallock, is in charge of the arrangements.
“Jesus said, “Let the little children come to me, and do not hinder them, for the kingdom of heaven belongs to such as these.” – Matthew 19:14