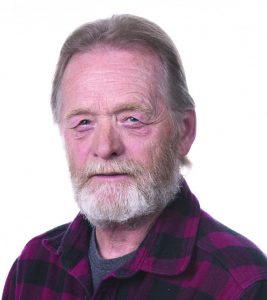 Donald George Austad passed away peacefully, surrounded by his family after a battle with cancer on December 2, 2017 at his home in Warroad, Minn., at the age of 64.
Donald was born Nov. 1, 1953 in Thief River Falls, Minn., to LaVonne (Swenson) and Donald I. Austad. He grew up and attended school in Lake Bronson, Minn. He served in the U.S. Army from 1972-1974. After his honorable discharge, he and Sandra Olson were married Dec. 18, 1976 and lived in Lake Bronson. After living in the twin cities and Roseau, Minn., they settled in Warroad. Donald worked for nearly 30 years at Marvin Windows and Doors, holding various positions, and most recently as a lead man.
Donald enjoyed deer hunting, fishing, working on projects around the yard, reading and riding ATV. He loved spending time with his family, working in the woods and especially enjoyed his yearly three week vacations spent at deer-camp with his family. His grandkids were very special to him. He will be remembered as a humble, kind, loyal, hard-working and patient man. Blessed be his memory.
He is survived by his wife, Sandra, Warroad; children, Travis (Katie) Austad, Brandon Austad, Garrett Austad and Sarah (Brenden) Sandy, all of Warroad; mother, LaVonne Austad, Lake Bronson; grandchildren, Kali, Isaiah, Brayden, Zoey, Eliana, and Abigail; siblings, Bonnie (Bobby) Olson, Lake Bronson; Pattie (Bob) Wold, Thief River Falls; Barbara (Mark) Holter, Karlstad; Ronald (Jill) Austad, Lake Bronson and Gary Austad, Lake Bronson.
Funeral services were held Friday, Dec. 8 at 1 p.m. at the Lake Bronson Community Covenant Church. Visitation was held Thursday from 5-7 p.m. with a 7 p.m. prayer service at Helgeson Funeral Home in Warroad; and one hour prior to the service. Interment was at the Riverside Cemetery in Lake Bronson.
Online guest book at: www.helgesonfunerahome. com