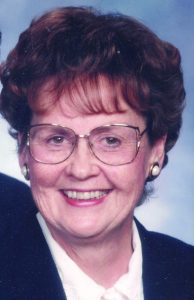 Helen Ann Martini Peterson Such began her journey on earth May 2, 1936, born to Clifford T. and Evelyn K. (Martinson) Martini in St. Paul, Minn. Because Clifford was an accountant for the Armour Meat Company, the Martini family moved often and lived in places like Birmingham, Oregon, Chicago, Texas, Grand Forks, St. Paul, and New Jersey. She experienced the 1950s in Alabama and blackouts during World War II in New York. Helen Ann graduated from high school in Teaneck, N.J., in 1955. She continued her education at Concordia College in Moorhead, Minnesota, graduating in 1959.
Helen Ann accepted a parish worker position in the Grace-Red River Lutheran Parish after graduation. There she met H. Alden Peterson, marrying him Jan. 7, 1961, and moving to South Red River Township to farm. To this union were born Janet, Barb, and Noel. Alden passed away Oct. 22, 1971. Helen Ann then moved into Hallock. She married Melvin Such July 12, 1976, and continued her life as a farm wife.
Helen Ann spent her life in service to God, her family, and her community, all of whom she loved immeasurably. She taught confirmation classes for years, sang alto in the Red River choir, taught Sunday School, and was an active member of L.C.W. and W.E.L.C.A. She hauled meals to the field; supported the sick and grieving; gardened and canned including her wonderful pickles; hosted huge family gatherings; knitted, crocheted, and cross stitched beautiful gifts; and sent cards to everyone she knew for every occasion. Helen Ann spent many hours volunteering with Kittson County Hospice and writing/directing plays with Gloria Swanson in the Hallock Community Theater.
Helen Ann’s favorite thing to do was support and document the lives of her family and friends. She loved to be at games, concerts, Sunday school programs, and 4H events cheering and snapping pictures. A few days later, everyone would soon receive his or her little envelope of pictures. She loved making sure every kid had some pictures. She would find a spot in the bleacher or park her wheelchair on the 20 yard line and yell her heart out for her beloved Bearcats. Every athlete was one of her “grandkids”, and she cared about them all.
Perhaps Helen Ann’s greatest gift was her ability to love and her strong faith. She showed her love not only through her gift of pictures and service, but also by always going out of her way to visit with everyone, truly wanting to know how they were doing; calling people regularly just to catch up; keeping track of her children and grandchildren; and praying constantly for everyone. Her unwavering faith was her legacy to her children and grandchildren. Helen Ann left to be with her Heavenly Father on Friday, Jan. 12, 2018, at the age of 81.
Helen Ann leaves to mourn, her husband Melvin; her children Janet (Owen) Swenson, Barb (Jim) Prather, and Noel (Heather) Peterson; grandchildren Kalli Peterson, Bailey Peterson, Nannie Peterson, Bryden Swenson, Jadyn Swenson, Stephanie Prather, and Gus Peterson; brother Neil Martini; sisters-in-law Marian Sjostrand, Taska Martini, Bernice Carlson, Elsie (Louie) Egstad, Trudy Such, and Sharon Such; brother-in-law Donald (Alice) Such; many nieces, nephews, and cousins; and a special friend Janice Hanson.
Preceding her in death were her parents Clifford and Evelyn; husband H. Alden Peterson; parents-in-law Barney and Erma Such and Henry and Nannie Peterson; sisters-in-law Jerrie Deere, Helen Torgerson; brothers-in-law Andy Sjostrand, Jack Deere, Tom Minchinton, Ellsworth Torgerson, Ted Carlson, Ray Such, and Robert Such.
Helen Ann’s funeral service was held Tuesday, Jan. 16, 2018, at 10 a.m. in Red River Lutheran Church, rural Hallock. Interment will be in Red River Cemetery. Rev. Frank Johnson, presiding; Renee Wahl, organist; Gus Peterson, soloist and Annaliese Johnson, soloist. Opening prayer, Stephanie Prather; scripture readings, Nannie Peterson, Kalli Peterson, Bryden Swenson and Gus Peterson; special reading, Bailey Peterson; The Lord’s Prayer, Jadyn Swenson. Casket bearers were Helen Ann’s grandchildren. Honorary casket bearers will be Helen Ann’s friends.
Austin Funeral Chapel, Hallock, was in charge of the arrangements. www. austinfuneralchapel.com