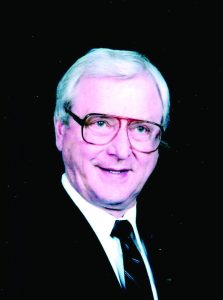 Harris Peterson, Grand Forks, N.D., passed away at Valley 4000 Woodside Village Jan. 27, 2018.
Harris Amund Peterson was born on the family farm in Teien Township, Kittson County Oct. 12, 1925 to Amund and Marie (Mathison) Peterson. He grew up in Teien Township and graduated from the Northwest School of Agriculture in 1942, and finished the advanced class in 1943.
On Nov. 2, 1945, Harris married Betty Jane Fering. After their marriage, Harris and Betty settled on the farm in Teien Township.
Harris married Beulah Jones Feb. 9, 1985 in Pasadena, Calif. For a number of years, Harris owned Gardena Feed and Seed Co. in Los Angeles, which was a distributor of birdfeed and pet foods on the west coast.
Harris began working at a young age and helped his father with the farming. He started cleaning seed for himself and neighbors in his spare time and founded the H. A. Peterson Feed and Seed Co. in 1947 when he began processing peas, canary seed, and mustard seed in a quonset. His vision and hard work have moved his seed-processing career from one Forsberg sieve mill and one elevator leg to a multi-million-dollar complex. Minn-Dak Growers Ltd. is now one the most modern and efficient mustard flour mills and buckwheat complexes in North America. It has facilities in Grand Forks, N.D., Donaldson, Minn., Drayton, N.D., and Dickinson, N.D., which supply mustard and buckwheat ingredients to the food industry worldwide.
Through the years, Harris has served on many boards for various organizations and was a council member of the Drayton Lutheran Church for many years. He also was part owner in the Karlstad and Crookston State Banks for quite a few years. Harris acquired his private pilot license and enjoyed flying the four-passenger Cessna 172 that he purchased with his son, Harold and Ed Hammer.
He received numerous awards throughout his career, including King Agassiz, Exporter of the Year for small business, to name a couple. He also received numerous supplier awards from customers worldwide.
The Northwest School of Agriculture honored Harris with the “Top Aggie” award in 1987. Through the years, Harris gifted a gazebo, flag poles, and a media room on the UMC campus. He established an endowed scholarship at UMC for students majoring in Agriculture. He also funded research and development for buckwheat at several universities including Cornell, NDSU, and UMC.
Educating the future generations was one of his priorities. He contributed towards the education funds for grandchildren, great grandchildren, nieces, and nephews. Harris was a generous man and helped so many people during his journey through life.
He also gifted money to the Mayo Clinic at Rochester, Minn., and Altru Cancer Center in memory of his sister, Sylvia.
Harris lived an amazing life and he truly loved his work. Words used to describe Harris are hard worker and visionary. Through his hard work and “Norwegian” determination was able to bring his ideas, plans, and dreams to reality. His soft side was his family, friends, and employees. He was always there to lend a hand when someone needed help.
Survivors include two children: Harold, Drayton, N.D. and Jan, Grand Forks, N.D.; grandchildren and great-grandchildren; Michael (Rebecca) Peterson and her children: Laci Lee, Steffan, and Charity; Jeremy (Mikayla) Peterson and their children: Knox, Grayson, and Blakely; Shane (Leah) Peterson and their children Garrett, Tyler, Nathan, and Mathew; Jason (Stephanie) Peterson and their children Sarah, Andrew, and Ryan.
Harris was preceded in death by his parents, brothers and their spouses: infant brother Arthur Grant, Clarence (Iona); and his sisters and their spouses: Ardelle (Ernie) Carlson, Beatrice (Al) Orsund, Ruby (Dale) Heazlett, Inez (Morris) Dahl, infant sister Sylvia Phillis, Sylvia (Melly) Thompson, infant sister Donna Jean.
In lieu of flowers, memorials are preferred to the donor’s choice.
Funeral service are scheduled for Saturday, Feb. 3, 11 a.m. at the Drayton Lutheran Church, Drayton.
Visitation will be Friday, Feb. 2, 6 to 8 p.m. with a 7 p.m. prayer service at Dahl Funeral Home, 2029 Central Ave. NW, East Grand Forks, Minn., and also one hour prior to the funeral service on Saturday in Drayton Lutheran Church. Interment will be in Skjeberg Lutheran Cemetery.
Arrangements by Dahl Funeral Home, East Grand Forks. Online guestbook at www.dandahlfuneralhome.com