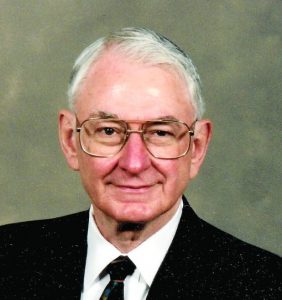 On Jan. 31, 2018, in his 84th year, Chet Fowler went to be with his Lord.
Chet was born in Wendell, Minn., April 20, 1933 to Chester and Lenora (Garceau) Fowler. The Fowler family (Chet Sr. Lenora, Jack, Joan, and Chet Jr.) lived in Hallock, Minn., for many years. Chet graduated from Hallock High School where he played football and basketball for the Bears, and surely excelled in academics. Upon graduation from high school in 1951, Chet enlisted into the Air Force. While in the Air Force he served as a Medic.
After his service, Chet completed an Accounting degree from the University of North Dakota. He graduated in 1959, and promptly went to work at Northwest Airlines as an accountant.
At a dance in Kennedy, Minn., Chet met Mary Brink. He was smitten. They married Aug. 16, 1958. They were married for almost 60 years at the time of Chet’s passing.
Chet and Mary explored the country while Chet worked as an Accountant for Northwest Airlines, Pillsbury, and Control Data. The Fowler family lived in Minnesota, Indiana, California, Virginia, and landed back in Burnsville, Minn., in 1971. Chet enjoyed a second career as a successful real estate agent which lasted for over 20 years.
Chet loved playing bridge, golfing and traveling with his wife Mary. They also loved going to their cabin in Cross Lake, Minn., where Chet spent fun-filled hours delighting his grandkids by inner-tubing over the big waves. Chet also won a couple of dollars playing poker each week at his high-stakes poker game. Chet could be found where there were games and camaraderie. Often, you’d hear his laugh before actually seeing him. He also liked flying high, and achieved his dream to acquire his pilot’s license. Chet’s knowledge of history was well-known and also feared by opponents during Trivial Pursuit games. Chet’s wife and daughters supported his love of history and they visited all but one of the civil war battle fields.
Chet was a poet. His quick wit combined with his writing skills resulted in hilarious poems. He shared his gift freely, and was the cause of many a belly laugh. He memorialized everyday events with his rhymes.
Chet’s kind, humorous, delightful, loving, grateful, steadfast spirit will be missed by his family and friends.
Chet was dearly loved by his family. He was a devoted husband, a loving father, and an attentive grandfather.
He leaves behind his beloved wife, Mary (Brink) Fowler; his two cherished daughters, Andrea Lynn and Nancy Jo; his six grandchildren, who were a source of pride and joy for him, Nicholas Anderson, Sarah Anderson, Katie Miedtke, Emily Anderson, Matt Miedtke, and Paul Anderson.
He’ll be embraced by his family who has preceded him in death, his father Chester Fowler, his mother Lenora (Garceau) Fowler, his brother, John (Jack) Fowler, his sister Joan (Fowler) Taylor.
We will celebrate Chet’s life at the Shepherd of the Valley Lutheran Church, Apple Valley, Minn., Friday, Feb. 9. Visitation at 10 a.m., service at 11 a.m., and lunch following the service at 12 p.m. Memorial donations in lieu of flowers may be made to The Animal Human Society of Minnesota or St. Jude’s Children’s hospital.