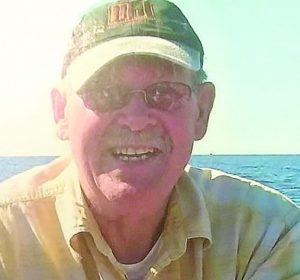 Larry John Jauhola, 66, Thief River Falls, Minn., formerly of Hallock, Minn., died Monday, Jan. 29, 2018, at the VA Hospital in Fargo, N.D., due to complications of ALS (Lou Gehrig’s Disease).
A family service will be held in the summer in Kittson County with full military honors.
Larry was born Aug. 24, 1951, to John and Ruby (Carlson) Jauhola in Hallock. He grew up in Hallock, spending much time in the country on his grandparents’ farm. He graduated from Hallock High School in 1969, and went on to attend college at Crookston, Minn.
He enlisted in the U.S. Army in 1971 and trained as a field helicopter mechanic. He was deployed to Vietnam the same year, where he served with the 57th Assault Helicopter Co., also known as The Gladiators, as a machine gun operator on a Huey helicopter. He received the Vietnam Service Medal with one Bronze Service Star, the National Defense Service Medal, the Republic of Vietnam Campaign Medal, and the Sharpshooter (Rifle) Medal.
He was honorably discharged from the Army in 1973, after which he served in Company B National Guard at Crookston.
Larry bought his grandparents’ farm in Thompson Township in 1973 and started his farming career. For many years, he also cared for his grandmother, Annie Carlson, while they both lived on the farm together.
In 1979, Larry married Joy Wight, and they had three children, who Larry proudly raised on the farm. The couple divorced in 1998. He worked at the American Crystal Sugar Co. beet plant in Drayton, N.D., for many years until he attended college in Thief River Falls for aviation mechanics.
In 1994, Larry began a 16-year career at the Kittson County Highway Department as a motor grader operator. He took great pride in keeping dozens of miles of gravel roads smooth on his route during the warm months, and clear of snow in the winter months. He was often at work after heavy snowfall around 3 a.m. to begin clearing roads for bus routes to ensure the safety of children going to school (including his own). He was also often one of the first to speed out in the middle of the night to help with any county emergency. He was so proud of his grader and kept it in top notch condition, and when he received a brand new CAT grader a few years before he retired, you’d think he was a kid with a brand new toy.
Larry’s favorite vacation spot was on his boat in the middle of Lake of the Woods, catching walleye and northern pike with his family and friends.
Larry retired from the county in 2010 as his legs began to get weaker.
He moved off the farm in 2011 to Thief River.
In 2013, he married his longtime partner, best friend, and caretaker Janice Johnson, to whom his family is eternally grateful. The couple made their home in Thief River Falls.
Larry was also proud to be a lifetime member of the Disabled American Veterans (DAV).
The family wishes to humbly thank the great staff at the Fargo VA hospital for their continued compassionate and amazing care of not only Larry, but all veterans who seek care at the facility.
Larry will be missed by: his wife, Janice Jauhola, Thief River Falls; his children, Andrew Jauhola, Mora, Minn., Anna (Derek) Wermers, Ethan, S.D., and John (Karen) Jauhola, Willmar, Minn.; his grandchildren, Jacob Wermers, Ethan, S.D., and Jonathon and Atalia Steinmetz, Sioux Falls, S.D.; his sister, Patricia (Daniel) Langehaug, Lake Bronson; his nephew, Mark (Chelsi) Langehaug, Lake Bronson; and niece, Danielle Langehaug, Minneapolis, Minn.; his brother-in-laws, Sid (Donna) Brouse, and Bradley Brouse; sister-in-laws, Jane (Jim) Pribula, and Becky (Murry) Dicken; and aunts, an uncle, cousins, great-nephews, great-nieces, and many other family and close friends.
He was preceded in death by: his parents; his step-father, Ray Benson; his grandparents; and two uncles.