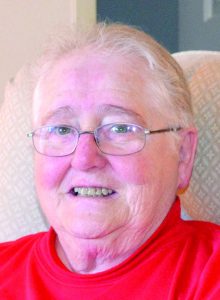 Judy A. Erlandson, 81, Sioux Falls, S.D. passed away after a long illness Monday, Feb. 12, 2018 at Dow Rummel Village, Sioux Falls.
Judith “Judy” Costello, daughter of James and Florence (Young) Costello, was born on a farm near Cavalier, N.D. in 1936. This setting instilled in her a love for animals of all kinds.
Judy earned a bachelor’s degree from the University of North Dakota in Business Education. She used that degree to teach high school business classes in Kennedy, Minn. She met her future husband, a former seminary student who had returned to farming, at a school meeting there. Judy and Paul Erlandson were united in marriage in 1959. They lived and worked on the Erlandson farm near Kennedy. Randy was born in 1961, and many rolls of film were used to record his early life. By the time Carol was born in 1963, the family had moved to their own farmstead near Donaldson, Minn. During these farming years, Judy tended her children, ran the household, brought meals to the men working in the farm fields, and ensured her family’s well-being.
Throughout subsequent relocations to Minneapolis, Minn. and Sioux Falls, Judy ran a tidy household, complete with pet dogs and cats, the most excellent chocolate chip cookies, and promptly-written thank-you notes. With her family, she traveled the 400 miles back to the farms of their origins every summer to visit and help with farm projects. During Randy and Carol’s school years, the Erlandson house was a second home to friends needing a positive word, a listening ear, and some fresh baked cookies. Judy was “everybody’s mom.” Judy held part-time employment at some Sioux Falls businesses and was a math aide at Whittier Junior High School while Carol was a student there.
Paul returned to seminary later in his life, and Judy became a pastor’s spouse, a role that she said made her uncomfortable at times. Nevertheless, she succeeded in winning the hearts of parishioners at every congregation. She and Paul traveled to Maryland, Minneapolis, Branson, Bismarck/Mandan, and Texas for family events and vacations. The family events included baptisms of their grandchildren, Janice and Joel Wienhold, with Paul officiating.
Paul passed away in 1997 after battling cancer. Judy had been his primary caregiver throughout his illness. Most recently, Judy was a resident at Dow Rummel Village, where she was well-loved by the staff and enjoyed frequent visits from her family.
Judy was a long-time member of East Side Lutheran Church and active in Stephen Ministry there. She received her Stephen Ministry Leader commission at a training conference in Seattle, Wash. Randy and Carol joined her there to witness their mother accepting this commitment to God and to serving people.
Grateful for having shared her life are her children, Randy Erlandson and his girlfriend, Anh, Brea, Calif., Carol Wienhold and her husband, Brian, Lincoln, Neb.; two grandchildren, Janice Luethje and her husband, Connor, Lincoln; Joel Wienhold, Ames, Iowa; her devoted friend, Sharri Ferrie, Sioux Falls; and many other relatives and friends.
In addition to her husband, Paul, Judy was preceded in death by her parents and a brother, William Costello.
Funeral services were held Saturday, Feb. 17, 11 a.m., in the Halladay-Peterson Chapel at Dow Rummel Village. Visitation was held Friday, Feb. 16, 5 to 7 p.m. at George Boom Funeral Home & Crematory, Sioux Falls.
In lieu of flowers, please consider a donation in Judy’s memory to East Side Lutheran Church, Dow Rummel Village or the Alzheimer’s Association.
Online guestbook at georgeboom.com.