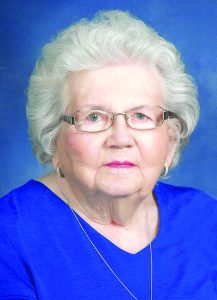 Early Saturday morning Feb. 24, 2018, Idell Junette Murray, 88, passed away to be with Jesus her Lord and Savior. She had been in the Essentia Health Hospital, Fargo, N.D., when she passed.
Idell was born in Halma, Minn., to Nels and Josie Oien July 22, 1929. She grew up in the home her parents had received as a wedding present from their parents. There were no brothers or sisters, but many cousins and friends that remained close throughout her life. The closeness of the community made everyone feel like family. She was baptized and confirmed in Eidsvold Lutheran Church in Halma. She attended grade school in Halma and then High School in Karlstad graduating in the spring of 1947.
On September 10, 1948 she married her lifelong partner Don Murray of Donaldson. They lived on their farm south of Donaldson for 69 years until moving to the senior living complex in Fargo the fall of 2016. Together they battled through thick and thin making a living and raising a family and always supporting each other.  Idell was a farmer’s wife which means she did most everything a farmer did and for nine years in the late sixties and early seventies she worked as a receptionist/secretary for Brink, Sobolik, and Severson, Hallock, Minn.
She is survived by her husband of 69 years Don; three sons, Robert (Barb), Glenwood Springs, Colo.; Rich (Deb), Lusk, Wyo.; and Ryan (Barb), Eagan, Minn.; seven grandchildren, John Murray (Mandy), Terri Lyles (Aaron) both in Glenwood Springs; Abby Murray, Grand Junction, Colo.; Brittany Coburn (Tom), Columbia Falls, Mont.; Kris Murray (Cassidy), Pocatello, Idaho; Alison Pearce (Travis), Zimmerman, Minn. and Elizabeth Murray (Peter Cannon), Burnsville, Minn.; eight great-grandchildren, Oscar and Tucker Murray, Damien and Camieo Pearce, Grace and Avery Lyles, and Gabe and Jake Coburn.
Funeral services are scheduled for Saturday, March 10, 2018 at 1 p.m. in St. Olaf Lutheran Church, Donaldson, Minn. Visitation will be held at the church for one hour prior to the service. Interment will be in the Stephen City Cemetery, Stephen, Minn., at a later date. Pastor Jon Dryburgh, presiding; Marlys Nelson, organist. Casket bearers will be Mark Kroulik, Keith Urbaniak, Wayne Knoll, Jeff Folland, Kyle Folland and Tom Britten.
Austin Funeral Chapel, Hallock, is in charge of the arrangements. www.austinfuneralchapel.com