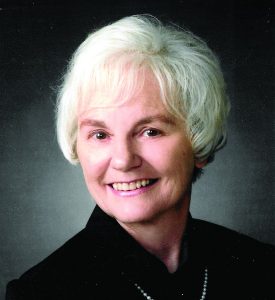 Dorothy “Dottie” Jirschele, 77, Wisconsin Rapids, Wis., passed away Monday, March 19, 2018 at the House of the Dove in Marshfield, Wisc.
Dorothy (Dottie) Jirschele was born Nov. 19, 1940 in Holton Township in Marathon County, Wis. She was the youngest child of Lucy (Wagner) and Frank Schopper. She attended the one-room Barry School through the eighth grade and graduated from Dorchester High School in 1958.
She worked for Packaging Corporation of America (PCA) in Colby, Wis., where she met John Jirschele, whom she married in Wausau, Wisc., in 1964. Dottie and John lived in Lancaster, Pa. for three years, where their sons were born. They returned to Wisconsin in 1968 and lived in Adams-Friendship, where Dottie worked for Lewis Container and Villa Pines Nursing Home. Two daughters were born to them during their time in Adams-Friendship. After moving to Wisconsin Rapids in 1979, Dottie worked for 25 years as a nursing assistant at Riverview Hospital, retiring in 2004. She was one of the original volunteers when the St. Joseph Hospice Program was created in 1983, and she volunteered her time with home hospice care for 19 years. During retirement, she continued working at a variety of jobs including work at assisted-living facilities, PA sales, Lamers (school bus aide) and Altenburg Farms. Dottie was driven by a strong work ethic, a value which she also appreciated in others. She enjoyed working outside the home and the social interaction found in the workplace.
Dottie and John enjoyed traveling and partaking in many different experiences. Throughout the 1990’s, they biked extensively on Wisconsin bike trails and many in Minnesota. They went dog-sledding in northern Minnesota, rode mules to the bottom of the Grand Canyon and back, and rode one hundred miles on a wagon train in Colorado. They took trips to Ireland, Austria and New York.
Dottie was always an active member of Saints Peter and Paul Catholic Church in Wisconsin Rapids, where she belonged to the Parish Council of Catholic Women. She was a Eucharistic adorer at the Marian Center for Peace for 12 years.  An avid bowler, Dottie bowled on teams most of her adult life. She also belonged to a bunko group and derived much pleasure spending time with the ladies during both activities.
Dottie is survived by her husband, John; sons, Pat Jirschele, Wisconsin Rapids; Tom Jirschele, Owen, Wisc,; daughters Dawn (Gary) Holm, Hallock, Minn., and Diane Jirschele, Nekoosa, Wisc.; seven grandchildren Therese Holm, Ramstein, Germany; Katherine Holm, Glen Burnie, Md.; Maria Holm, San Antonio, Texas; Christopher Holm, McGuire AFB, N.J.; Andrew Holm and Genevieve Holm, both Hallock; and Sedona Arendt, Ironwood, Mich. She is further survived by her sisters, MaryAnn Reynolds, Abbotsford, Wisc., and Joan (Don) Kempf, Wausau, Wisc.
Dottie was preceded in death by her parents and her sister, Dolores Elliott.
“Dottie’s family would like to express their profound gratitude to the staff of the House of the Dove for their care and compassion while performing and carrying out the corporal works of mercy. It was a great blessing to her family.”
A Mass of Christian Burial was held Thursday, March 22, 2018 at 10:30 a.m. at Saints Peter and Paul Catholic Church in Wisconsin Rapids. Rev. Robert Schaller officiated the service. The family  greeted relatives and friends Wednesday evening, March 21, at Ritchay Funeral Home in Wisconsin Rapids from 4 – 7 p.m. with a rosary service was at 6:30 p.m. Entombment took place at the Good Shepherd Mausoleum at Calvary Cemetery.
Ritchay Funeral Home in Wisconsin Rapids assisted the family with arrangements.