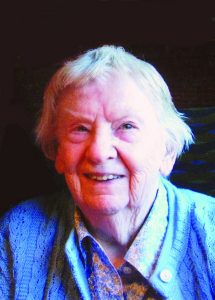 Mildred “Milly” Alice Jansen, 96, passed away peacefully at her home  Thursday March 8, 2018. She will be greatly missed.
Milly was born Oct. 27, 1921. She married Jotham (“Joe”) Jansen on Aug. 4, 1945 in Hallock, Minn., and they spent more than 65 years together. He preceded her in death on May 12, 2011.
She is survived by her children and their spouses; Michelene (Chip) Wells, Moose Lake Minn.; David (Myra) Jansen, Maple Grove Minn.; Nancy (Paul) Kennedy, Shoreview Minn.; Amy (Brian) Varani, Columbus, Minn.; as well as seven grandchildren and seven great-grandchildren.
In addition to her husband, she was preceded in death by her siblings Robert Clapp, Geraldine (“Jerry”) Frederickson, and Mary Jean Overend.
A memorial service celebrating her life, including burial at Fort Snelling is planned for later in the spring.