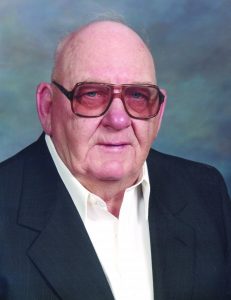 Lawrence Lind, 89, Lake Bronson, Minn., passed away at Karlstad Healthcare Center,  Karlstad, Minn., Friday, April 13, 2018.
Lawrence Harold Lind was born Nov. 13, 1928 to Fred and Tilda (Johnson) Lind in Hazelton Township of Kittson County, Minn.  He grew up on the family farm and attended country school near Lake Bronson.  Lawrence was a veteran of the U.S. Army and served during the Korean War. When Lawrence returned home he began working with his brothers moving buildings, clearing land and building homes.  They also farmed together in Kittson County during the 1960’s.
In 1971 Lawrence was united in marriage to Flossie Pearson and took on the role of father at the age of 42 to Flossie’s five children.  Flossie passed away in 1988.  Lawrence began working at Marvin Windows in 1990 and worked for 11 years there.  He thoroughly enjoyed everyday at Marvin’s.  Lawrence was very active in Kittson County, serving on the Two River Soil and Water Conservation Board for 30 years and was also one of the first Arctic Cat Snowmobile Dealers in the area.   He  served on the board of directors of Farmers Union Oil and was a 50 year member of the American Legion.
Family members include, his children, Jodeen Stark, Yorba Linda, Calif.; Tammy (Randy) Fossum, Rugby, N.D.; Lary (Laurie) Pearson, Culbertson, Mont.; Tracy (Sue) Pearson, Fargo, N.D. and Jamie (Dawn) Pearson, Estherville, Iowa; 16 grandchildren; five great grandchildren; a brother, Reuben Lind, Lake Bronson and several nieces and nephews.
He was preceded in death by his parents; his wife, Flossie; a son, Terry Pearson; a brother, Einar; a  sister, Clarise and an infant brother.
Funeral services are scheduled for Thursday, April 19, 2018 at 11 a.m. in Zion Lutheran Church at Lake Bronson.  Interment will be in Riverside Cemetery, Lake Bronson.  Military honors will be accorded by the Halma-Lake Bronson American Legion. Pastor Kathy Levenhagen, presiding; Galen Nordin, soloist and Corienne Jacobson, organist.       Visitation will be held at Austin Funeral Chapel in Hallock, Minn., on Wednesday evening from 6 to 8 p.m.
Austin Funeral Chapel is in charge of the arrangements. www.austinfuneralchapel.com