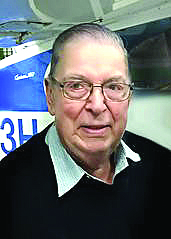 Maurice Sugden, 83, Hallock, Minn. passed away at Kittson Memorial Healthcare Center Thursday, May 3, 2018.
George Maurice Sugden was born in Hallock July 4, 1934 to George Wesley and Hilda (Nyren) Sugden. Born and raised in Hallock Township, he was a lifelong resident of Kittson County. Maurice attended the Hallock schools from 1st through 8th grades, and in his 9th and 10th grade years he was a student at the Northwest School of Agriculture in Crookston. He then returned to Hallock to complete his last two years of high school, graduating in 1952.
During his boyhood, Maurice was always interested in agriculture and conservation. He raised his own sheep on his father’s farm, and was very active in the 4-H Club. He had a keen interest in airplanes and flying. He took his first few flights with Hallock Airport manager, Robert Young-gren, before taking lessons from LaMar Anderson, Hallock. At the age of 17, and after only 6.4 hours of instruction, he flew solo on Nov. 24, 1950 in a 1946 Piper J3C-65 Cub, N88593. He received his private pilot’s license on July 17, 1951 and his commercial pilot certificate on May 27, 1965. He flew a Piper Pawnee doing aerial spraying for Luther Younggren for five years before partnering with Clare Nelson, forming Nelson-Sugden Flying Service. He continued in the aerial application businesses for 40 years. Always looking to add to his piloting experience, he earned his Single Engine Sea (SES) airplane rating on Oct. 28, 1980 flying a Cessna 180. Over his 67 years of flying, he logged over 16,000 safe flying hours with over 10,000 of those hours in an ag plane. On Nov. 21, 2017, he was presented with the Wright Brothers Master Pilot Award.      During his career, he flew the employees of the Minnesota Department of Natural Resources during annual moose surveys in northwestern Minnesota. He also flew many trips to Lake of the Woods for ice fishing with family and friends. His children, grandchildren and great-grandchildren, along with his friends and family will cherish many memories of flying with him.
Hunting and fishing were his greatest hobbies, and many trips were taken in the U.S. and Canada with his lifelong friend and hunting partner, Charlie Anderson. They enjoyed time in the woods and hunting with their sons who have many happy memories of those adventures. As an avid conservationist,      Maurice received recognition as Honorary Chapter Farmer of the Future Farmers of America in 1974, and was also named with honor as a Regional Farmer-Sportsman at the Northwest Sports and Travel Show in 1977. He farmed 530 acres of land, which he purchased from his father and is now being farmed by his son Rick, and grandson Nathan.
On June 13, 1954 he married Dianne Weberg of Lancaster. They made their home on the family farm where they raised their seven children.
Family members include his wife, Dianne and children; Peggy (Richard) Gjovik, Hallock; Rick (Jodi) Sugden, Hallock; Scott (Mary) Sugden, Anchorage, Alaska; Bob (Marilyn) Sugden, Baudette, Minn.; Kathy (Tom) Deegan, Mesa, Ariz.; Julie Dickison, Seattle, Wash. and Debra (Al) Scott, Avondale, Ariz.; grandchildren Elise, Nathan, Kevin, Conrad, Aimee, Ian, Cole, Allyson, Kendyl and Dyllon; great-grandchildren Kajsa, Quin, Delia, Mahren, Kinzie, Wesley, Jasper and Charlie; and a sister, Mona Hotten, Hallock.
He was preceded in death by his parents, grandson Corey Sugden, son-in-law Mark Dickison, brother and sister-in-law Ronald and Gloria Sugden and brother-in-law James Hotten.
Memorial services were held Tuesday, May 8, 2018 at 2 p.m. in First Presbyterian Church, Hallock. Visitation was held at Austin Funeral Chapel, in Hallock on Monday evening from 6 to 8 p.m. with a prayer service at 7 p.m. Rev. Marge Landwehr, presided.
Special music was provided by Kristi Morrison, organist; Galen Nordin and Erik Finney, soloists/guitar.
Pallbearers were Nathan Sugden, Elise Sims, Kevin Gjovik, Aimee Sugden, Conrad Gjovik, Allyson Shearer, Ian Sugden, Kendyl Dickison, Cole Sugden and Dyllon Dickison.
Honorary pallbearers were Roland Larter, Gerry Barth, Bill Sugden, Jim Younggren, Jon Fowler, Brian Blawat, Bob Anderson, Mark Wilwant, Donald Burton, Leland Swenson, Dan Maloney, Matt Kuznia and his countless friends from across the country.
A heartfelt thank you to Dr. Potti, Dr. Noyes and the special nurses at the Cancer Center of North Dakota.
Austin Funeral Chapel, Hallock, was in charge of the arrangements. www. austinfuneralchapel.com