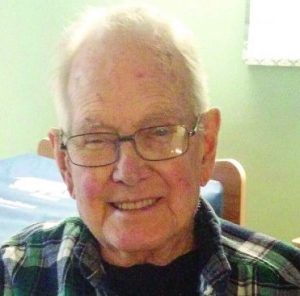 Hjalmer Vig Jr., 86, passed away peacefully to join his Heavenly Father Tuesday, May 22, 2018 at the Kittson Memorial Healthcare Center, Hallock, Minn.
Jr. was born March 2, 1932, to Hjalmer and Clara Vig in Aneta, N.D. and was the oldest of three children. When he was a sophomore in high school, his family moved to Grand Forks, N.D., where Jr. attended Aakers College. Three years later, Jr. joined the air force and served his country for eight years. Jr. married his first wife, Lila, in 1952 and married his second wife, Marlyce, in 1975. He worked mostly in construction and at the Pembina Bus Plant, Pembina, N.D.
Jr. was a passionate man who enjoyed carpentry, gardening, and animals. He especially enjoyed socializing with people and attending sporting events for his grandchildren.
Jr. was extremely proud and loved his 13 children: David, Michael, Dennis, Danny, Jeff (Susan), Kelli (Jim), Todd (Elli), Steve (Peggy), Kittry (Pat), Kim (Steve), Tom (Missy), Bill (Kristin), and Matthew (Jordan).
He is preceded in death by his parents: Hjalmer and Clara, three of his sons: David, Michael, and Dennis, and by his brother, Jack.
He is survived by his wife, Marlyce; his sister, Janice; and by many loving relatives including 98 grandchildren.
A family service was held Monday, May 28, at 6 p.m, and a funeral service Tuesday, May 29, at 10 a.m. Both services were held at Lancaster Covenant Church, Lancaster, Minn. Family and friends were invited to celebrate his life.
Austin Funeral Chapel, Hallock, was in charge of the arrangements. www. austinfuneralchapel.com