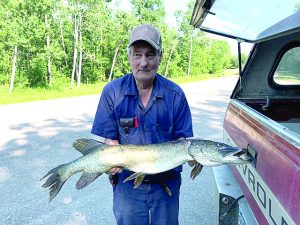 Ervin Gorsuch, 77, of Hallock, Minn., passed away at his home Monday, July 2, 2018.
Ervin Rueben Gorsuch was born Sept. 20, 1940 in Karlstad, Minn., to William and Ragna (Haugen) Gorsuch, the first of 10 children. He grew to manhood near Karlstad and was raised in the Lutheran faith. He attended school in Karlstad and was part of the class of 1959.
Ervin entered the U.S. Navy on March 19, 1959 and served until March 18, 1963. He took great pride in his service to his country. Upon his discharge from the Navy, he returned home and started working for his cousin on his farm near Hallock.
On Oct. 27, 1968, he was united in marriage to Stella Skinner in Lancaster, Minn. They settled and made their home in Hallock, where he worked at the Standard station, and later the North-cote Elevator.
In 1976 he started working for Kittson Auto & Implement, where he continued to work until his retirement in December of 2005. It was while he was employed at Kittson Auto that he found his niche as a mechanic. He loved to tinker and work on various equipment, especially Versatile tractors, and became a friend to many area farmers. He had a ear for what was wrong with the tractors just by listening to them run. He believed in doing a job right the first time around and not giving up until it was done, even if it meant going until late, late at night.
In his time off in the summers he loved putting together soil savers at the shop, and when he wasn’t doing that he could be found at one farm or another doing field work.
Not one for sitting still after he retired from Kittson Auto, he worked briefly for Morrison Implement in Hallock. Following that he worked for various farmers in the area, whether it was planting, harvesting, cultivating, haying, or simply fixing their tractors. When someone would call, he would go. He also worked several beet campaigns at the pilers in Hamilton, N.D., and Kennedy, Humboldt and Stephen, Minn.
In 2008, he started working for Jason Cadieux on his farm west of Hallock. He was proud of the truck he drove for Jason. He enjoyed working there and did so until his death.
He was equally proud of his two grandchildren and their accomplishments. He spent many hours watching concerts, dance and piano recitals, football and basketball games, and most recently watching his granddaughter graduate high school.
When he wasn’t working or farming he enjoyed hunting and fishing. He spent numerous deer seasons at his boyhood homestead east of Karlstad hoping to bag the big buck. He looked forward to this vacation each year and loved spending time with the neighbor boys and various friends. The stories were passed around after each season about the one that got away, usually over coffee and oatmeal raisin cookies.
His other love was fishing. He would spend countless hours with friends at the dam in Hallock or Lake Bronson, on the Roseau River, or at Lake of the Woods. He liked fishing from shore the best, and could always catch the big ones. His most recent catch was a 36 inch Northern Pike at Lake Bronson. He loved the outdoors and all that it had to offer.
He is survived by his wife, Stella; a daughter, Susan (Mike) Budziszewski, Strandquist, Minn.; a son, Scott, Hallock; two grandchildren, Sarah and Anton Budziszewski, Strandquist; brothers, Raymond (Carolyn) Gorsuch, Salem, Ore; Kenneth (Helen) Gorsuch, Yakima, Wash.; David Gorsuch, Roseau, Minn. and Earl (Betty) Gorsuch, Halma, Minn.; sisters, Gloria Gustafson, Greenbush, Minn. and Mary (Rick) Daigre, Grafton, N.D.; brothers-in-law, Richard (Judy) Skinner, Pembina, N.D., Dale (Linda) Skinner, Farmington, Minn., and Merlyn Winters, Hallock, Minn.; as well as several nieces and nephews, great nieces and great nephews, cousins, and countless friends.
He was preceded in death by his parents; two brothers, Larry Dean and Norman, and a sister, Linda.
Funeral services were held Monday, July 9, 2018 at 11 a.m. in Grace Lutheran Church, Hallock. Visitation was held at the church for one hour prior to the service. Interment was in Hillcrest Cemetery, rural Donaldson, Minn. Rev. Frank Johnson, presided; Renee Wahl, organist; Don Thorlacius, soloist and Doug Piekarski, soloist. Casket bearers were Jason Cadieux, Terry Osowski, Jim Younggren, Tom Gustafson, Roman      Gudmundson, and Dennis Newell. Military honors were accorded by the Karlstad American Legion and the North Dakota National Guard.
Austin Funeral Chapel, Hallock, was in charge of the arrangements. www. austinfuneralchapel.com