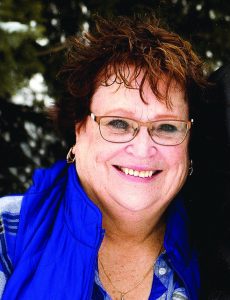 Sandra Lindgren, Kennedy, Minn., passed away peacefully while on a weekend getaway in Mille Lacs, Minn., Thursday, August 16, 2018 at the age of 66.
Sandra Lee Fossell was born in Karlstad, Minn., Dec. 6, 1951 to Duaine and Joan (Pearson) Fossell.  Sandra was baptized and confirmed at Maria Lutheran Church, Kennedy, Minn.  She grew up on the family farm with three siblings that never failed to give each other an adventure that each would carry into their adult years.  As a young child she was stricken twice with spinal meningitis and was given a 50-50 chance of survival.  With God’s grace she was given the chance to live and from that experience came a strong willed personality that protected her and probably contributed to her having lots of “stuff”.
Sandra graduated from Kennedy High School in 1970 and was a proud “Rocket” cheerleader and fan which she cherished her entire life.  She graduated from East Grand Forks AVTI in 1976 earning her degree as a Medical Assistant and went on to work at the Drayton Clinic.
On July 30, 1977 she married Steve Lindgren in a beautiful outdoor wedding on her parents farm. Sandra worked at the Kennedy and Kittson Central Schools for many years as the school secretary.
Wherever she traveled, shopping was at the top of her to do list and she always came home with treasures for the family.  Working at school, she became a surrogate Grandma to many of the students touching their lives in a special way.  Whether it involved taking the hand of the kindergartner and taking them to their room, wiping away the tears of a crying child, making sure a child took their medications, or listening to the high schooler’s life problems, and even some teachers problems, she opened her heart to help.
She had a passion for her children and grandchildren and was looking forward to being a Great Grandma. She became fondly known as “Grandma Goose”.
After retirement she worked part time at Cyrus Resort, Baudette, Minn., and looked forward to all of her grandchildren’s school events.
Sandra is survived by her husband of 41 years Steve, daughters Traci Lindgren,     Pembina, N.D., Jeni (Ryan) Schwenzfeier, Kennedy and a son Brett (Lindsay) Lindgren, Hallock, Minn.; 7 grandchildren, Britta, Breanna (Cory), Austin, Jaidyn, Afton, Evan, and Ivy; siblings LaDonna (Denton) Peterson, Butch Fossell and Kristi (Barry) Langen; in-laws Darrell Lindgren, Joni (Mike) Anderson, Val Jean Lindgren, and numerous nephews, nieces, aunts and uncles.
Even though Sandra may not be with us today, her vibrant red hair, infectious smile and boisterous laugh will be an inspiration and reminder to live each day to its fullest as we continue on in our life’s travels.
Funeral services are scheduled for Wednesday, Aug. 22, 2018 at 11 a.m. for an outdoor service at Red River Lutheran Church, rural Kennedy. Visitation will be held at Red River Lutheran from 6 – 8 p.m. with a prayer service at 7 p.m..      Honorary pallbearers are Grandma Goose’s treasured grandchildren.
Austin Funeral Chapel, Hallock, is in charge of the arrangements. www.austinfuneralchapel.com