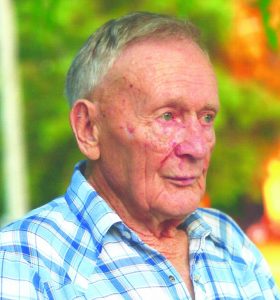 Until Sept. 5, 2018, Kittson County has been home for James R. Anderson all of his 83 years, 3 months and 12 days, with the exception of a few months some summers while he worked around the state on various road and bridge construction jobs for a variety of construction employers.
Jim was born May 23, 1935, to Kenneth and Ann (Leskiw) Anderson in rural McKinley Township. At the age of 6 years old, Jim caught the life threatening disease called polio, which settled in his leg and hip area. On Dec. 7, 1941, Jim was taken by Sioux Line train to Gillette Children’s Hospital in St. Paul, Minn., where he spent the next several months with his leg in traction, suspended by pulleys on a bar above his bed. After getting home, he wore a steel whole leg brace for several years. Riding horseback with his brother Bobby on Gent and Maude was his greatest pleasure. Later in life, Jim had a total hip replacement followed by many serious heart attacks, strokes, by-pass surgeries and cancer.
When he got home again, Jim attended the one room McKinley Country School through the 8th grade. After that he attended Lancaster High School.
At the age of 16, Jim left school and went to work for P.N. Tri as a beekeeper’s assistant, handling and placing bee boxes at various farms and then helping with the honey making processes in the fall.
In Humboldt, Jim met Vida Reese. Within a couple years they were married and started a family there. During this time, they managed the Humboldt Bar and Jim picked up other odd jobs. For a while they lived and worked on the Glidden Dairy Farm. A short time later they moved back to the Olaf Anderson farm in McKinley Township to continue raising their family of four boys and two girls. After their marriage, Jim decided to fulfil his lifelong dream of driving big trucks and operating heavy equipment. He worked for Swingin Construction, Drews Construction and Roy Benson Construction as an equipment operator building roads and bridges across the state.
It was during this time that he spent some time out of Kittson County, coming home weekends to operate the family farm and help Vida run the family-owned bar, Vi’s Place in Lake Bronson. Then Jim thought it would be better to work for himself so he started his own construction company, Anderson Con-struction. He built up quite a name for himself and was in constant demand with his gravel trucks, backhoes, loaders, scrapers and Cats.
Vida passed away in April of 1993. In June of 1994, Louise Coffield became Jim’s constant companion until his death 24 years later.
Proceeding Jim in death were his wife, Vida; parents, Kenneth and Ann; a baby sister, Alyce and a young brother, Walter.
Left to mourn Jim’s passing is his partner, Louise; six children, Terry Anderson, Alyce (Neil) Siats, Debbie Harlow, Jim (Linda) Anderson, Scott Anderson and Dave Stair, Eddie Anderson and Joyce Storeby; 10 grandchildren, Carrie (Steve) Gjerde, Kellie Mowry and Jeremy, Kristin (Bill) Vig, Jeremy (Denise) Aderson, Jason (Sarah) Anderson, Kala (Jonathan) Kvernen, Kyle Anderson, Trent (Jenny) Siats, Elizabeth (Jayson) Henderson and Anthony (Mila) Siats and 26 great-grandchildren.
Also mourning Jim’s passing are those he called his other kids, (Louise’s children and grandchildren) Tammy (Neil) Wilson, Jeremiah, Sarah, Neil, Jessica and Brandon, Julie, Sydney and Ashley Holm.  Also surviving are brothers, Robert Anderson, Hallock; Jerry (Marge) Anderson, Roy Anderson and Glenn (Teresa) Anderson, all of Lancaster as well as nieces, nephews, cousins and other relatives.
Funeral services were held Saturday, Sept. 8, 2018, at 10 a.m. in Lancaster Covenant Church, Lancaster, Minnesota. Interment was in Riverside Cemetery, Lake Bronson. Visitation was held at the church on Saturday for one hour prior to the service. Pastor Galen Nordin and Pastor Kathy Levenhagen, presiding; Janelle Hostrup, organist, Galen and Julie Nordin and Lyndon Johnson, trio. Casket bearers were Jim’s grandchildren.
Austin Funeral Home, Hallock, was in charge of the arrangements. www.austinfuneralchapel.com