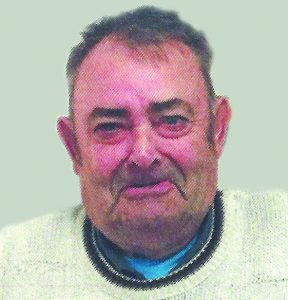 Merlyn R. Winters, 77, of Lancaster, Minn., passed away at Kittson Memorial Healthcare Center, Hallock Minn., Sept. 7, 2018.
Merlyn Ray Winters was born to Lewis and Agnes (Pearson) Winters Nov. 20, 1940 in Hallock. He attended school at North Star Country school, and Lancaster Public School. He married Lois Skinner Dec. 26, 1967 and they resided in Lancaster.
Merlyn struggled with speech difficulties from the time he was a young boy. It did not keep him from being an active member of the community. He was a member of the volunteer fire department and the Lions Club. He loved selling raffle tickets for any organization in the county and each of us have probably bought a ticket from him.
Merlyn owned and operated a septic and portable toilet service. At Christmas time he enjoyed giving pens and calendars to his customers. He was always willing to help others, hauling stuff or cutting down trees. He will be remembered for his fireworks display and “nickel scramble game” he organized for every Lancaster celebration.
He loved Lancaster and the people. He was a champion aluminum can collector and recycled thousands of cans, along with selling Lancaster cookbooks. Together, Lois and Merlyn had a large cookbook collection.
Merlyn is survived by his sister, Marlys Sjostrand of East Grand Forks, Minn., sister-in-law, Stella Gorsuch of Hallock, brother and sister-in-laws, Richard and Judy Skinner, Pembina N.D., Dale and Linda Skinner, Farmington, Minn. Also survived by Lois’s daughter, Debra and Dennis Newell and their families, along with nieces, nephews and many friends.
He was preceded in death by his parents, Lewis and Agnes, his wife Lois, sister and brother-in-law Arlene and Bill Broekemeier, brother-in-law, Ray Sjostrand, and brother-in-law, Ervin Gorsuch.
The family would like to thank Galen Nordin for the amazing help and friendship throughout the years. Merlyn always said he was blessed, as he felt like Galen was his brother.
“Abee lobee” as Merlyn said in his years on earth, and now everyone understands as he says… Love you!
Funeral services are scheduled for Wednesday, Sept. 12, 2018 at 11 a.m. in Lancaster Covenant Church. Interment will be in Riverview Memorial Garden Cemetery, Lancaster. Visitation will be held at the church for one hour prior to the service. Rev. Galen Nordin, presiding.
Austin Funeral Chapel, Hallock, is in charge of the arrangements.