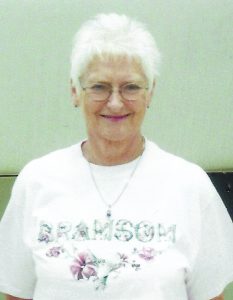 Marilyn Burton, 82, of Humboldt, Minn., passed away at Altru Hospital in Grand Forks on Friday, Sept. 28, 2018.
Marilyn was born in Eureka, S.D. on Sept. 3, 1936 to Orval and Martha (Beck) Roberts.  Her parents were teachers in rural schools in southern North Dakota. The family moved to Denhoff, N.D. when Marilyn was six and lived in several other communities including Kennedy, Echo, Storden and Grey Eagle, Minn.  Marilyn graduated from Grey Eagle high school in 1954.  She started her life work as a student at Hamline University in St. Paul at their Nursing Diploma Program in Midway Baptist Hospitals.  She graduated in 1957 working at Midway Hospital  where she became an RN and later at Bethesda Hospital in Crookston, Minn.
On Feb. 8, 1958, she married James Burton in Humboldt.  Marilyn worked at Kittson Memorial Hospital and nursing home for 43 years as an RN and Director of Nursing. For the past 16 years she and Jim enjoyed traveling to visit their children while heading south where they lived five months of the winter at Citrus Mobile Park in Edinburg, Texas.
Marilyn and Jim lived in Humboldt and enjoyed camping with their Good Sam friends, church activities at the Pembina Free Church, gardening of vegetables and flowers and quilting for family and friends.  Marilyn was a member of the Evangelical Free Church.
She is survived by her husband, Jim; children, Julie (Mike) Thomas, Mitchell (Liz) Burton and Todd (Kim) Burton; eight grandchildren; a great grandson; sister, Orleen (David) Gilchrest; brother, Willis (Peggy) Roberts; nieces, nephews; grand nieces, nephews and cousins.  She was preceded in death by her parents; aunts and uncles.
Funeral services are scheduled for Friday, Oct. 5, 2018 at 11 a.m. in the Evangelical Free Church in Pembina, N.D.  Visitation will be held at Austin Funeral Chapel, Hallock, Minn. on Thursday evening from 5 to 7 p.m. with a prayer service at 6 p.m. Rev. Mason Peters, presiding. Casket bearers will be Marilyn’s grandchildren.  Special music will be provided by Savannah Bernstrom and Amanda Caillier.
Austin Funeral Chapel, Hallock, is in charge of the arrangements. www.austinfuneralchapel.com