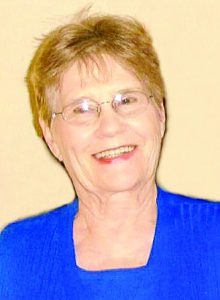 Audrey A. Nelson, Thief River Falls, Minn., formerly of Lake Bronson, Minn., passed away Oct. 1, 2018, at the age of 87, at Sanford Hospital, Thief River Falls.
Audrey Soderfelt was born Sept. 25, 1931, to Axel and Agnes (Stenquist) Soderfelt in Teien Township, Kittson County Minn.  She attended country school in her elementary days and graduated from Kennedy High School in 1949.  She was baptized and confirmed at the Teien Mission Covenant Church.
In 1950, Audrey married Roy Gustavson.  They had two children, Janet and Bruce.  Roy died from complications of heart surgery in 1957.
In 1958, she met and married Earl Nelson.  They had a daughter Julie.  Earl passed away in 2008 of cancer.
Audrey was a woman of talent and wisdom.  She was an excellent artist and was a part of establishing Artists Unlimited.  She worked for Northwest Community Action, taught classes on taking the postal exam and spent time as City Clerk in Lake Bronson.
She worked side by side with Earl on the farm.  She was a wonderful cook and hostess and enjoyed the challenge of learning something new.  Her door was always open.  She was a loyal friend and gave freely, with both hands, even if only one was needed.
Audrey leaves behind her son, Bruce (Lynnette) Nelson, St. Hilaire, Minn., and a daughter, Julie (David) Helm, Thief River Falls, Minn.; beloved grandchildren, Jon (Nicole) Gustavson, Chandra Misson, Jennifer (James) Rowley, Brandon (Suzanne) Nelson, Melissa (Toby) Ferguson, Bryn (Sarah) Nelson, Jesse (Kelsey) Helm and Brandy Helm; 14 great-grandchildren; son-in-law, Richard Bjorlie and sister, Ardyce Woinarowicz.  She is also survived by many nieces, nephews, friends and family who loved her dearly.
She was preceded in death by her parents; husbands, Roy and Earl; daughter, Janet; brothers and their wives, Gerald (Harriet), Morris, LeRoy, and Merle (Delores); sister, Norma Nelson and her husband, (Floyd).
Services will be held at 10:30 a.m. on Saturday, Oct. 13, 2018 at Zion Lutheran Church in Lake Bronson, with interment following at Riverside Cemetery in Lake Bronson.
Visitation will also be held one hour prior to the service on Saturday at the church.
Condolences may be sent to www.johnsonfuneralservice.com,