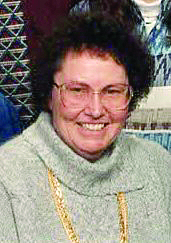 Ruth A. Easton, 80, Hallock, Minn., passed away at Kittson Memorial Healthcare Center, Hallock, on Monday, Oct. 29, 2018.
Ruth Ann Kendall was born Aug. 28, 1938, in Medford, Mass., to Wes and Ruth Kendall.  She grew up in Medford and graduated from high school there.  Ruth went to attend college, receiving a degree as a  dental hygienist. Ruth began working in Pomona, Calif., where she met her future husband, Donald Easton.  They were married in California on Jan. 9, 1966.  Ruth and Don decided to move back to Minnesota were Don grew up.  They settled in St. Vincent and raised their four children there. Ruth ran a daycare service for many years, retiring and moving to Hallock in 2007.  Don passed away on Aug. 13, 2013.  Ruth was a member of Grace Lutheran Church.
Ruth is survived by her children, Debbie Easton, Darien, Conn.; Janine Easton, Neche, N.D.; Clifford (Julie) Easton, Kaukauna, Wis., and Mark (Miwa) Easton, Marysville, Wash.; and two grandchildren, Wesley and Evan.
She was preceded by her parents and four brothers, Wes, Dick, Gene and Roger.
Funeral services were held Friday, Nov. 2, 2018, at 11 a.m. in Grace Lutheran Church, Hallock. Interment was in St. Vincent Cemetery, St. Vincent. Visitation was held at the church on Friday for one hour prior to the service.  Rev. Frank Johnson, presiding; Renee Wahl, organist and Erik Finney, soloist. Honorary casket bearers were family and friends.
Austin Funeral Chapel, Hallock, was in charge of the arrangements. www. austinfuneralchapel.com.