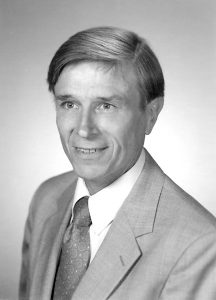 Auldon Eugene Johnson, 86, Oak Park Heights, Minn., passed away peacefully while surrounded by family on Nov. 22, 2018.
Auldon was born on May 1, 1932, in Minneapolis, Minn.
Auldon was raised on a farm in Hallock, Minn. He graduated from Hallock High School where he participated in football, basketball, track, baseball, choir, and band. He attended Gustavus Adolphus College his freshman year and was a member of the football team before serving four years in the United States Air Force during the Korean War.
After being honorably discharged from the Air Force, Auldon attended the University of Minnesota where he obtained a bachelor’s degree in electrical engineering. Auldon retired from Northern States Power Co. where he was a computer engineer at the Allen S. King Plant in Oak Park Heights and project manager for the design and construction of the Sherco 3 power plant in Becker, Minn.
Auldon loved long-distance running and completed several marathons including Paavo Nurmi, Boston, Grandmas and Twin Cities. He was the Minne-sota Distance Running Associ-ation Runner of the Year in 1982 (50-55 years age group) and competed in the Masters USA Track & Field Championships in Eugene, Oregon. Auldon was also a competitive bicyclist and participant in WisPort Cycling until the age of 79 years old and was a silver medalist at the World Senior Games in St. George, Utah.
Auldon enjoyed spending time with his family, sports, and reading history, and was proud of his Finnish and British ancestry.
He is survived by wife of 61 years, Janet; children Diane (Peter), Timothy (Sharon), David (Gina), and Gregory (Kelli); and granddaughters Alicia, Emma, Sarah, Kaitlin, and Megan.
Preceded in death by parents, Nels and Signie Johnson.
Memorial services will be held Saturday, Dec. 1, 2018, at 11 a.m. at Bradshaw Celebration Of Life Center, 2800 Curve Crest Boule-vard, Stillwater, Minn., with visitation one hour prior to service.